Taro, one of the earliest cultivations, is threatened by the tsunami of GMO research in Hawaii- which is the world headquarters of genetic research in agriculture. 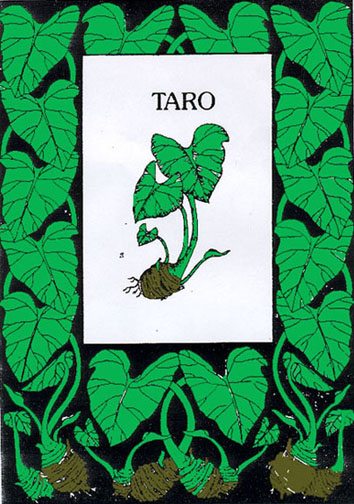 Until recently Hawaii was a major exporter of cane sugar, pineapples and other tropical fruits to the mainland and Japan, as well as large-scale cattle raising industry. These agricultural sectors have suffered and the state of Hawaii has sought other experimental agricultural uses for the lands that had been maintained in monoculture for thirty years. There were experimental tamarisk plantations, and imported keawe plantations established (that wondeful white honey from Hawaii comes from this tree, my friend Logan studies the ethnobotany of keave and the potential use of its pods for sweetener, like mesquite pods).
Monsanto, Bayer, and the posse of bossy agri-life science companies (chemical companies) have come in to do their field tests here in Hawaii so that the escaped pollen won't endanger the mainland agriculture, and to be out of sight.
[youtube=http://www.youtube.com/watch?v=P29nhSR1l30&hl=en]
This is only one consequence of the collapse--many of you know about the contamination of the organic papaya in Hawaii.
In spite of this, there is a resistance to the ceaseless charges from the chemical companies.  There are dedicated grassroots and educational organizations such as Hawaii SEED, Hawaii Organic Farmers Association, and The Kohala Center working for a GMO free, self-reliant island food system.  On a lighter note, for your enjoyment, here is a two part short film, Taro Roots, telling the tale of an urban Hawaiian culturally reconnecting with his native land.  Mahalo.
[youtube=http://www.youtube.com/watch?v=sZ7iLICM2ts&hl=en]
[youtube=http://www.youtube.com/watch?v=jmq81x9qnkE&hl=en]