Farmworkers are speaking out against abusive grape concerns

We've been telling you about the outrageous behavior of Giumarra--the world's largest table grape company, whose labels include Nature's Partner. Giumarra harvests approximately 1 out of every 10 bunches of grapes picked in the US. Because the company is so huge, their behavior helps set the industry standard. Instead of being an industry leader, Giumarra helps set the standard of routinely abusing their workers. 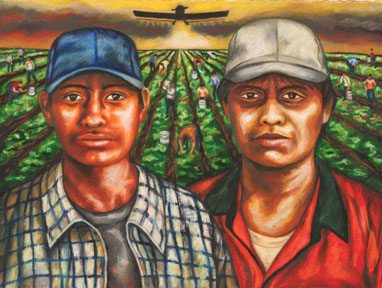 On Labor Day, we launched a petition that a delegation will hand in to Giumarra/Nature's Partner. The petition demands that this huge corporation treat the workers laboring in their fields with dignity and respect and stop retaliating against UFW supporters.
Workers want to have at least 25,000 signatures by the end of September. To date, we have more than 7,500. Please sign the petition and help farm workers fight back.
Meanwhile, the abuse at Giumarra continues. This week we want to tell you the story of Elba Gonzalez. Elba and her family are not new to Giumarra. They have been laboring in their fields for the past 7 years. Recently, they became frustrated with the unfair pressure that they had to endure under Giumarra officials.
When a family member was told to go home without pay, the Gonzalez family did the unthinkable. Instead of allowing themselves to be intimidated into silence, they spoke up. They refused to back down. When the pressure from supervisors escalated, this brave family of "Chavistas" told the supervisors that they were going to the UFW and would file a complaint. The supervisor tried to intimidate them by "yelling that we did not know what we were doing, that because of us complaining they would lose their license to sell grapes." The Gonzalezes refused to let the supervisors intimidate them and scare them. They went to the UFW and filed charges anyway.
After they left the fields, they were told by friends that the supervisors tried to scare the other workers into not speaking up. A foreman told the crew "that for next year there would not be work for the Coachella crews and if there was, it would be for a select few."
When Elba and her family returned to work, the foreman interrogated them regarding the charges they filed and "the crew boss commented that for sure, next year we would not be given work. Other workers also told us that we would definitely not be returning next year to work for our participation in union-related activities."
Farm workers deserve the same basic rights that you and I expect to have--simple things like having a voice, standing up for what they know is right and wrong, and being treated humanely. However, it doesn't work that way at Giumarra. When workers demand their rights they risk everything. While silence is not golden, for too many farm workers, it's the only way.
Help make it stop. Please sign the petition today.