young farmer jason mark has this to say

on change.org. which I 've just learned about from a nice lady named katie G.
A Month Without Monsanto
by Jason Mark April 02, 2010 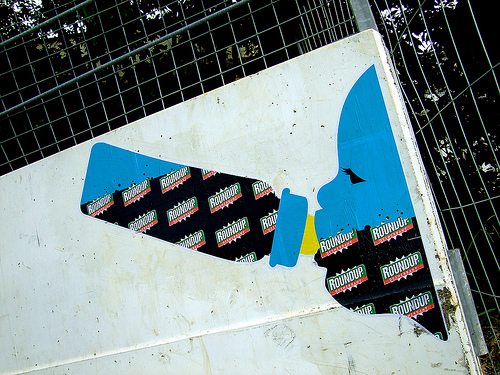 April Dávila bit off a little more than she could chew. When the thirty-something aspiring novelist and new mother came across a story on The Huffington Post about how Monsanto’s genetically modified corn had been linked to organ failure in rats, her first thought was, “I’m never eating Monsanto again.” A friend of hers warned that it wouldn’t be so simple since Monsanto “is in everything,” as he put it. She decided to take him up on the challenge, and in the spirit of Colin Beavan’s No Impact Man pledged to go a month without touching anything with connections to the biotech and seed conglomerate.
She ran into trouble on Day Two. Here’s an excerpt from her March 2 diary on her blog, A Month Without Monsanto:
So I’m feeling disheartened. I’m reminded of the Simpsons episode where Lisa goes to Bart’s military school, and she’s getting picked on while trying to cross some rope strung over a mass of thorns and Bart says “I thought you wanted a challenge?” Lisa responds something to the effect of “Duh, I meant a challenge I could do!"
As April was quickly (and painfully) coming to learn, avoiding Monsanto-linked products in contemporary America is like trying to, well, avoid breathing. The Missouri-based biotechnology company is an overwhelming force in the food industry. Ninety-three percent of soybeans grown in the U.S. come from seeds that have been genetically altered by Monsanto; ditto 80 percent of corn seeds. The company controls about 60 percent of the GM cotton seed market.
For farmers, Monsanto’s market dominance has meant a recent sharp rise in seed prices. For April, it meant that there was very little she could eat — or wear. Just about any processed foods — which almost universally contain soy and corn — were out. Same with conventionally raised meats, since the farm animals very likely fed on Monsanto-bred corn. Any clothing that contained conventionally grown cotton (which is the vast majority of apparel) was also a no-no.
continue reading HERE