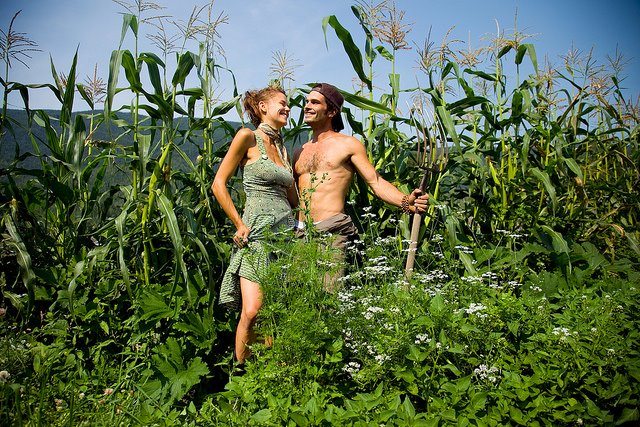 What are Young Agrarians?  Young Agrarians (YA) are promoters of the new agrarian movement.  Young agriculturalists, farmers, urban farmers, market gardeners and their supporters using the power of media and the internet to build a community that can feed the people of Canada.  The Young Agrarians are the trumpet blowers, promoters, marketeers and designers who want to rebuild, promote and inspire the agriculture of our country, from the country to the city.
Modelled after the Greenhorns movement in the United States, we are excited to launch Young Agrarians (YA) Canada side Spring 2012 in B.C.  YA’s goal is to grow more young farmers and food producers and connect existing ones under one umbrella.  YA Founder Seann Dory and YA Coordinator Sara Dent, met with the National Farm Unions Youth Committee in March of 2011 during their annual retreat.  There was a resounding “yes!” to the idea of a grassroots, cross-Canada, on-the-ground and on-line campaign that supports young farmers.  We are now moving this concept into production, and aim to go national in 2013.

Why? Simply put – we need more young people growing food and farming.  According to Statistics Canada figures, Canada's farming population is shrinking, reaching a historic low in 2006.  In 1931, one in three (33%) Canadians lived on farms.  In 2006, that number has plummeted to one in fourty-six or 2%.  To make matters even more worrisome, the average age of farmers in 2006 was 51.  Astoundingly, half of Canada’s farmers report that off-farm employment is their main source of income. The Fraser Basin Council’s 2010 Sustainability Snapshot indicates that less than 5% of farmers in B.C. are 34 years and younger, with more than 50% 59 and up.

To these ends, YA joins forces to bring an agriculture revolution: where young people are returning to the soil to take up the work of feeding people and caring for the land, accessing the resources they need to get started from educationalopportunities to apprenticeships, land succession opportunities and more.  Young farmers are generally disconnected from one another yet struggling with the same issues: how to make farming viable, access/own land, develop markets, and advocate around policy issues that directly impact small scale farmers daily.  YA will team with farm organizations, non-profits, and college/university agriculture programs to gather young people around the idea of growing food.  YA events will help inspire a new agrarian community, with skills sharing and community building activities.
Beginning in B.C.: YA will strategically convene farm-involved individuals and organizations to collaboratively develop a province wide outreach program designed to: network young farmers, grow thenumber of young people farming, and develop economic support for young farmer initiatives.  The long-term vision of YA is to increase local food production and the economic viability of urban and rural farming; as well as to increase involvement of young farmers in advocacy and policy issues that support small-scale farmers.
Young Agrarians is housed by FarmFolk CityFolk (FFCF).  FFCF is a not for profit society and registered charity that works to cultivate a local, sustainable food system.  FFCF projects provide access to and protection of foodlands, support local growers and producers, and engage communities in the celebration of local food.
For more information, please contact: [email protected] or Sara Dent at her email address: [email protected]
41.995092-73.875411
red hook, new york