we ought to have a prince of organic here in america

Prince Charles: 'If I didn't do this, who would?'
Britain's best known organic farmer on soil, sustainability and the unity of all things
by  Tim Adams for The Observer, Sunday 14 August 2011 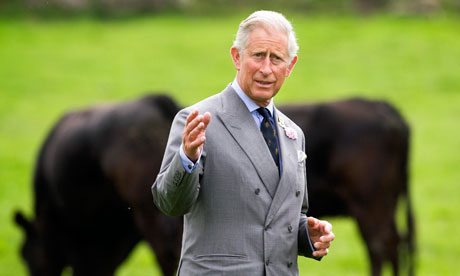 There is a sign as you turn into the drive at Highgrove that reads: "Beware. You are entering an old-fashioned establishment". After the best part of the week following the sign's owner, Prince Charles, around the country – from Dartmoor to the Yorkshire Dales and back to Gloucestershire, him mostly in a helicopter, me mostly on a train – I have been struggling to work out exactly how old that "old-fashioned" is.
There has been a strong whiff of the early 1930s about a lot of it. At the bunting-festooned Great Yorkshire Show, HRH has been touring pig pens and tasting pork pies carrying a shepherd's crook and surrounded by red-faced men in bowler hats. You half expected William Brown and the Outlaws to emerge from under a trestle table. At other times, though, as he has mused on the latent spirituality in hedgerows, we could be at the Wordsworthian beginning of the 19th century before steam engines and progress came along to ruin everything. The prince is frankly unapologetic about this. More than once I hear him say: "People think what I'm doing is about going backwards." The implied subtext is: "And what on earth could be wrong with that?"
The occasion of this particular bout of time travel has been the inaugural National Countryside week, created to coincide with the first anniversary of the Prince's Countryside Fund. The fund is designed to reweave some of the fabric frayed by urbanisation and industrialised farming; to encourage big agriculture-related business to support the rural communities that supply it and to attempt to reconnect city-dwelling families with farming and food production. Like all of the prince's work, this is heartfelt, highly ambitious, energetically pursued on many fronts and beset with more than a few contradictions. He seems to feel both inspired and fated to have taken it on: "If I didn't do it, who would?" he asks me, in passing.
read the full article online HERE