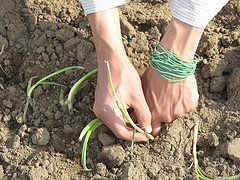 West Milford, New Jersey (CNN) -- For Gary Oppenheimer, 2007 was a year of plenty.
His backyard garden produced a bountiful harvest with a surplus of spaghetti squash, melons, pumpkins, tomatoes, peppers and cucumbers for his family. At the end of the season, Oppenheimer had 40 pounds of excess fresh produce -- and nowhere to take it.
"Nobody wanted more," he said. "My wife wouldn't let me bring any more in the house, and I didn't want it wasted." So Oppenheimer took the produce to a local food pantry at a battered-women's shelter. When he dropped off the food, he was struck by the response he got from the shelter worker.
"[She] thanked me profusely, and as I left she said, 'Now we can have something fresh to eat,' " Oppenheimer recalled. "That stuck with me because I remember walking away thinking, 'What? They have canned stuff only all the time?' "
Finish the article at CNN.com