this article was originally posted on the blog of the National Young Farmers Coalition. 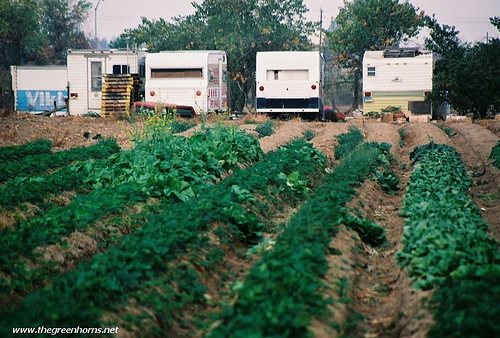 A new report by the USDA’s Economic Research Service, “Direct and Intermediated Marketing of Local Foods in the United States,” has some important implications for those interested in farming or marketing local foods to consumers.  The USDA studied local farm production and sales during 2008, then compared farms that sell directly to customers with those that sell their products through an intermediary such as a supermarket or a restaurant.  The study found that marketing local foods–both those sold directly to consumers and those sold through an intermediary–earned a total gross revenue of 4.8 billion dollars that year.  Farms selling their food solely through intermediary markets made 2.7 billion dollars in local food sales that year, about three times more than was sold directly by farmers to consumers through farmers’ markets, roadside stands, and CSAs.   The report notes that as much as two-thirds of local foods are marketed through supermarkets or restaurants. Selling local foods through intermediate outlets such as supermarkets or restaurants may also require less labor because the farmer need to spend time at intermediate outlets, such as farmers’ markets do.

Another point of the report is that, at present, large farms have a clear advantage in selling local products to intermediaries–92 percent of local sales in 2008 to intermediaries were by large farms.   This may be because small farms aren’t able to produce enough food to meet distributors’ demands for large quantities:  The report speculates that larger farms may have an advantage in sales to intermediate clients because “…many restaurants, grocers, and regional distributors demand timely delivery of large volumes of food with consistent quality” (p.7).  It would be hoped that the USDA would also recognize that smaller farms, often in collaboration with each other, could also generate the larger volumes required by intermediaries.
According to the data presented by the USDA, vegetable, fruit, and nut farms dominated local sales, accounting for eight times more sales than livestock or field crop farms in 2008.  Higher profits per acre for vegetable, fruit, and nut farms compared to livestock farms were also reported.  These farms occupy fewer acres throughout the US, but the USDA statistics show a higher gross sales yield per acre than either field crop or livestock farms.
What does the future hold for local agriculture?  The USDA predicts that local farms will do even better this year than they did in 2008.  According to an estimate by the department, local farms will bring in seven billion dollars in total revenue: an increase of about 45 percent from the year the report was completed.  This data shows a steady increase in the total profitability of local agriculture, which only generated 650 million dollars in the early 1990′s.  The report indicates a huge increase in the number of farms selling directly to consumers, with the number of farmers’ markets alone nearly doubling in the past 10 years to a total of 5,200 nationwide in 2011.
In line with these figures, the USDA report also observed that local food sales were highest in urban areas.  According to the report, “more than 50 percent of small local food sales farms were found in metro counties and 30 percent in rural counties adjacent to metro counties…” (p. 12).  Metropolitan concentration gives producers the possibility of urban sales and markets that are vital to making local farming profitable.  The USDA analysis suggests that farms concentrated near urban areas also focus heavily on “niche” or highly-valued products.
For us beginning farmers, the report notes some interesting statistics on the regions of the country that support the largest percentage of beginning farmers.  The overall highest percentage of beginning farmers was found on the West Coast, with nearly half  of all farmers classified as “beginning” farmers, with 10 years of experience or less. The Northeast was the region in the US that was ranked second, with 28 percent of farmers considered “beginning” farmers. With only one-fourth of farmers in the US thought of as “beginning,” these higher regional percentages could indicate policies or legislation that are especially helpful to beginning farmers in the West or Northeast.
Overall, this is a good sign for the local food movement.  It demonstrates that local food is becoming more popular in the US, and that more people are starting to pay attention to where their food comes from. Continuing to market to that growing interest is a great focus for beginning farmers today.