Here is a bit of an essay from greenhorn Derrick Mead, of Mead Orchards, who has graciously hosted events on his farm, donated apples and veggies to our 2009 pigs, and much more. 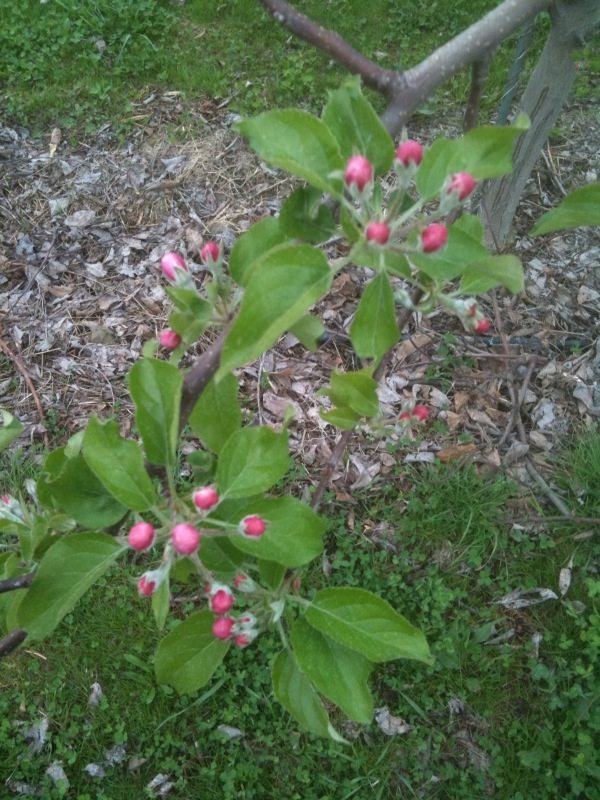 Tight Pink; Agricultural Relational Aesthetics
April 14, 2010
Apple blossoms in Northern Dutchess County are largely in the tight pink stage. This is something that orchardmen can say with a straight face, but it pays to remember that only a tiny fraction of the ever-dwindling number of people employed as farmers in the United States raise tree fruits. It’s been a fraught few days here, with sub-freezing temperatures between 3 and 7AM. The equipment available to mitigate these temperatures during bloom–peaches and plums are already at petal fall, most pear blossoms are open, and apples, oh those apples–is expensive and dangerous. The two options at Mead Orchards consist essentially of a massive propane heater which mounts behind a tractor, to be driven slowly and continuously around the orchards in circles for hours, and two gigantic stationary horizontally-oriented propellers, for evacuating cold air. These measures are only effective down a few degrees below freezing, but this can make all the difference. Last night the low came in at 30.3 degrees F, with both heater and fans running, and it looks like most everything came through all right. We’ll see what tonight brings; the forecast is similar.
The tight pink theory will have to be developed more fully at a later date, but suffice to say it boils down to this: I propose that the vast majority of working-stiff-type people–men, usually–who’re supposedly ‘immune’ to ‘frivolous’ aesthetic concerns are simply occupying that level of faculty with other thoughts. Safety, for example: if you work all day (and all night, sometimes) in a potentially hazardous environment, whether a factory, a farm, a superstructure, or a garage, physical safety is something that occupies a level of thought slightly below consciousness at all times. Some people are especially good at this: these are the ones who are able to not only keep themselves out of harm’s way, but also identify and alleviate dangerous situations for those less attuned.  Them that are bad at it usually get hurt and stop, by choice or necessity, working in dangerous situations pretty quickly. The rest of us actually rely on people like the former to make the travels and travails of our days as safe as they are, and we live generally in a paradise of safety and liability concern, from this particular prerogative. If you take personal safety off the radar, however, thought time and emotional energy is freed up to concentrate on how the drapes are clashing with the carpet, or how much that lady’s layered hair/Frank Gehry building/grafitti tag looks like 15th century Shogun armor. I think this argument goes for hunger and shelter, too–if you’re truly worried about where your next meal is coming from, or where you’re going to sleep, the fact that your socks don’t match falls away.
So: ‘tight pink’ becomes nothing more than a perfectly accurate descriptor for a particular stage in the blooming of apple trees, planes land safely by the thousands every day, and razor-sharp blades of every description, spinning at untold revolutions per minute all around the world stay securely ensconced in their guards and tracks, cutting the wood and metal they’re applied to, and not anyone’s fingers.