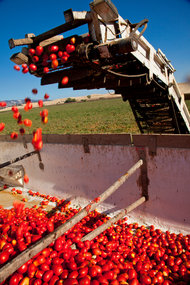 Not All Industrial Food Is Evil
By MARK BITTMAN
I’ve long wondered how producing a decent ingredient, one that you can buy in any supermarket, really happens. Take canned tomatoes, of which I probably use 100 pounds a year. It costs $2 to $3 a pound to buy hard, tasteless, “fresh” plum tomatoes, but only half that for almost two pounds of canned tomatoes that taste much better. How is that possible?
The answer lies in a process that is almost unimaginable in scope without seeing it firsthand. So, fearing the worst — because we all “know” that organic farming is “good” and industrial farming is “bad” — I headed to the Sacramento Valley in California to see a big tomato operation.
I began by touring Bruce Rominger’s farm in Winters. With his brother Rick and as many as 40 employees, Rominger farms around 6,000 acres of tomatoes, wheat, sunflowers, safflower, onions, alfalfa, sheep, rice and more. Unlike many Midwestern farm operations, which grow corn and soy exclusively, here are diversity, crop rotation, cover crops and, for the most part, real food — not crops destined for junk food, animal feed or biofuel. That’s a good start.
Read the rest of the article here.