Good news on the doj hearings. Remember. it's not glamourous news. But at least it's not an unstoppable oilspill wafting out over the commons. 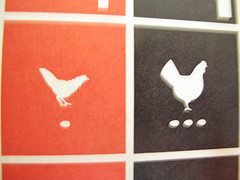 By WILLIAM NEUMAN
Published: June 18, 2010
The Obama administration proposed new rules on Friday seeking to increase competition and rein in potentially unfair practices by large meatpackers and poultry processors. The move is aimed at helping small livestock and poultry farmers survive in an industry dominated by corporate giants.
The rules could give farmers and ranchers new leverage in suing meat companies that they believe have treated them unfairly. They would end practices among cattle and hog buyers that may lower prices paid to farmers and feedlot owners. And they would set new protections for poultry farmers, who often must go deeply into debt to build the chicken houses needed to win contracts from processors.
“As this market has become more consolidated and vertically integrated for efficiency’s sake it lends itself to unfair practices and practices that are not particularly transparent,” the agriculture secretary, Tom Vilsack, said in an interview.
Finish the article at NYtimes.com