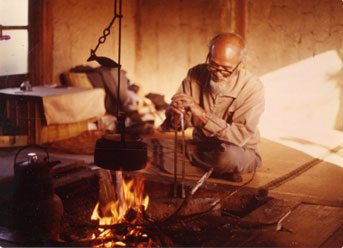 Sadly, natural farming innovator Masanobu Fukuoka passed away, Saturday, August 16, 2008, at his home in Iyo, Ehime Prefecture, Japan of old age. He was 95.
Fukuoka authored a number of books including One Straw Revolution: The Natural Way of Farming and The Natural Way of farming: The Theory and Practice of Green Philosophy, both of which are available in English.
Fukuoka taught us to observe nature and work with it rather than trying to impose our desires on the land. He also popularized the use of seed balls, which has been used in agriculture and in re-greening projects.
The father of the permaculture movement, Bill Mollison, spoke very highly of Mr. Fukuoka and said that, before hearing of Fukuoka's work, he could not see a way to produce grains sustainably, and had not thought they could be incorporated into permaculture.
Around the world, Fukuoka's work resonated with people and it continues to be adopted and applied to different conditions around the world. His work and his teachings remain a great inspiration to us and we will miss him.