I once worked for a miraculous biodynamic farmer in Switzerland. It was actually 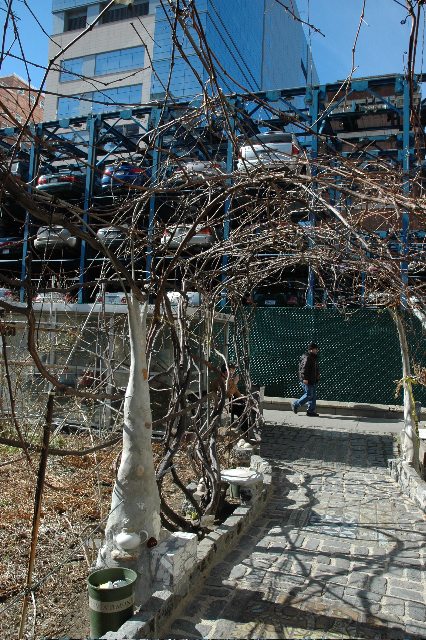 the first 'real' farm I worked on, a dairy farm. We milked 30 cows for making Emmenthal cheese and special yogurt. Because we were Biodynamic, the milk had to go early to the cooperative creamery, so that it would touch only the clean machines, and not touch the residue of the other milk from the 35 surrounding farms. As a result I had to rise up at 4:30 am to bring the cows down off the mountain for milking...that was the summer I learned a lot about discipline. Half the milk went to the health shop, the other half went to the childrens' clinic at the hospital. That hospital realized the importance of vital acidophilus bacillus for the children.
It's quite a different scene here at Bellevue Hospital where I sit with my cousin Annatina Meischer MD-- I've just poached some special blue eggs in the kitchen and was radicalized by the contents of the cupboards there. Ham stock with only msg, salt and hydrolized vegetable protein, garlic salt from 1942, nothing but processed transgenic condiments and styrofoam - it was a dystopian exercise in hospital archeology. 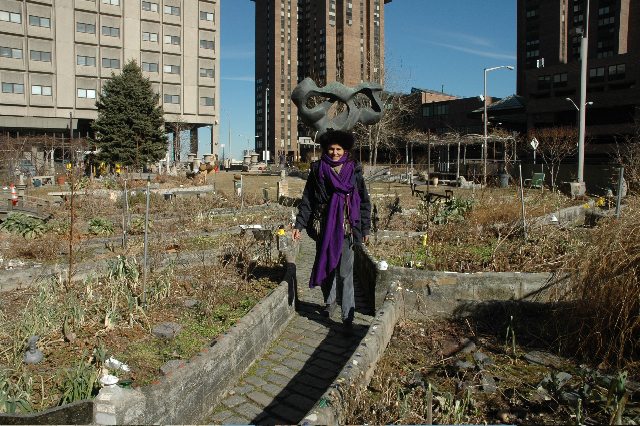 My farmer, when I asked him about his decisions, laid it out like this: The world is crazy and messed up. "I could either be a Terra-ist or a terrorist" Its the kind of radical, apocalyptic view that quite a few agriculturalists identify with - and indeed the general public might have trouble telling those two groups apart! A prime example is my cousin. With her bright red hair, horned ear and punk-gypsy stylishness, Annatina isn't your typical shrink - her methods are unorthodox, but her results are stunning. She works with substance addicts, and plays colorful jujitsu with hospital administrators, makes dragons from toilet bowls and discarded bed-sheets, and builds glorious elfin sculptures in a surreal institutional cul-de-sac. For the past 15 years she's developed the Bellevue Sobriety Garden, a gloriously architectural urban farm which is a resource, playpen and imaginative outlet for patients, volunteers and butterflies in the midtown of Manhattan. You can visit the garden: MAP
It's one of the special treasures of New York, and Annatina is one of the special teachers. One of the prime pixies of gooseberries and self-sown mache carpets, Annatina has magic enough for 3 city blocks.. but not enough help in the garden. She needs some greenhorns, preferably calm, collected flexible ones.. who can help out in the garden 2 afternoons a week. Planting, tending, and being present for the addicts, volunteers and passersby who want to get involved in the garden. I'd say its a great chance to get access to some dirt, and gain experience in horticultural therapy.
If you are interested in the position please email Anne Dailey, Greenhorns Blog Manager.  She will direct it to Annatina: [email protected]
For a manual about what is possible, see:
http://www.theabundancefoundation.org/small-is-possible.html