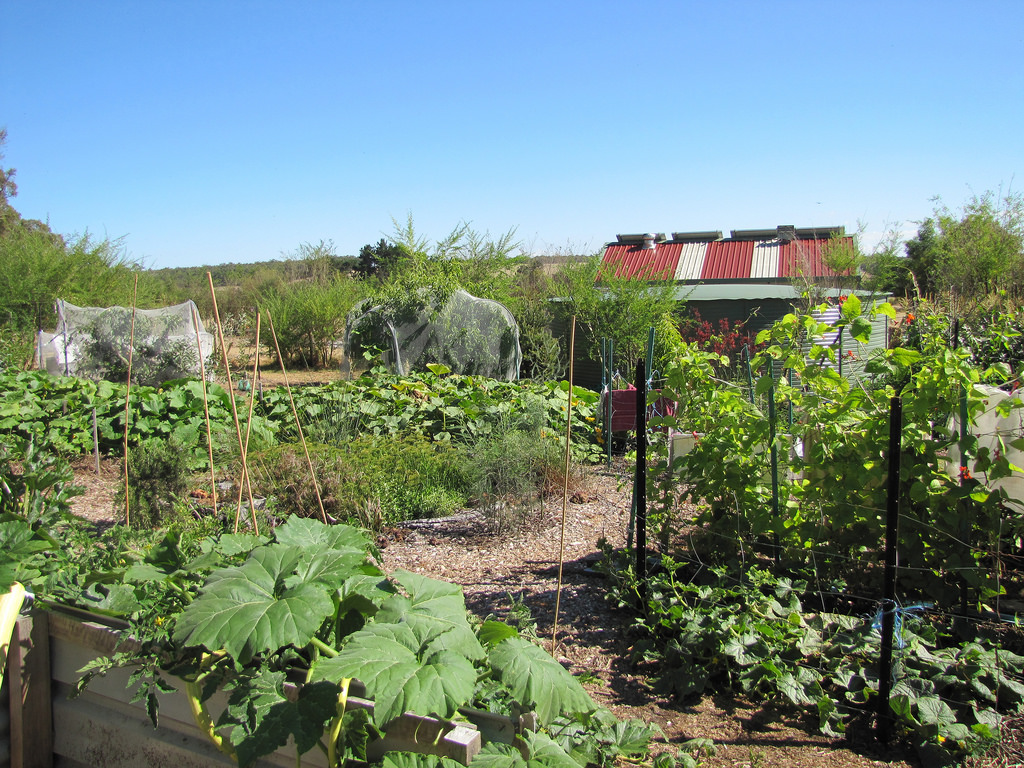 Permaculture is essentially a design philosophy created for and typically applied to food producing systems. However it has also been translated for use in many other areas such as architecture, community building, and corporate structures. Permaculture, developed by Bill Mollison in the late 1980s in Australia, has been adopted and adapted by gardeners, farmers, and designers across the world in the years since. Many permaculture solutions mimic natural ecosystems by creating tightly interwoven environments where all parts support each other. For example, in wild ecosystems, monocultures don’t exist as they do in our gardens and on our farms. Highly diverse planting, called a polyculture, serves several functions. These include slowing pests by making it more difficult to find the next plant of the variety they feed on. With varied crops in one bed, soil life can be in better balance. One plant may be nitrogen fixing to the benefit of its neighbors while another might provide a trellis or shade out competitive weeds. The three sisters planting strategy (or guild as it is called by permaculturists) is a simple example of the benefits derived from polycultures.
Complexity and diversity are pillars of permaculture, helping create a stable, healthy system. The more opportunities for interaction - between plants, insects, birds and animals, the better. We see this in a pond setting. More activity and life occurs at the edge of the pond where the water and land meet than in the middle of the pond or on the land a few yards away from the pond. The biodiversity found on ecological edges helps keep ecosystems stable. When one organism, say mosquitos, experiences a population boom, a diverse ecosystem supplies the habitat that mosquito predators will be able to live in. Thus the frogs and toads living on the banks of the pond can leap into action to bring the mosquito population back under control. The same is true on farms. Many of us already know the benefits of having strips of wildflowers planted near fields of cash crops. Similarly bramble-y edges that provide habitat for birds will be protection against a sudden attack by locusts or other pests.
Permaculture adopts the attitude that the benefits of a diverse system outweigh the losses in terms of harvesting efficiency and the space that is often called upon to be wild habitat. For many permaculturists, the increase in biodiversity and stability of their sites bring increases in crop health, yield, and pleasure. Permaculture systems require often heavy front end work in terms of observing the site and the pre-existing forces at play as well as establishing the backbone of the intended system (earth-moving, orchard establishment, etc.). Once the system is established, however, the permacultural model aims to shift the bulk of labor back to nature and off the shoulders of the farmer or gardener. Farmers Masanobu Fukoka and Sepp Holzer have been utilizing permaculture strategies since before the term existed. Their farms are prime examples of the impressive results permaculture strategies can yield in even inhospitable locations.
Many permaculturists advise that the best way to learn is to observe nature at work and to start trying things. If you’re interested in reading more, however, check out the following books:

This post was written by the newest member of the Greenhorns Blogging Team Cambria Whitcomb! Cambria is closing in on the end of her first official year of farming. She grew up in a rural town in Michigan and is a graduate of the University of Chicago. After a stint in San Francisco, she has returned to small town life - now in North Carolina where she pursues a plethora of environmentally-focused activities. She is interested in combining her background in the arts with her love of farming and the belief that systemic agricultural shifts make the most direct path to improving the environmental crisis. (How exactly those interests will mesh remains to be seen!) Cambria’s favorite farm implement is the scuffle hoe and she once incorporated cow manure into an assignment for a college art class.