official CNN report: If you farm, you will eat well.

hey, we're not saying it. It's CNN who has figured this out...
Life on an Organic Farm 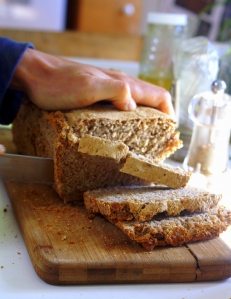 by Jack Hamann
Lynden, Washington (CNN) -- Jesse Williams' career as an organic farmer almost ended before it began. Rising with the sun, Jesse carefully collected his first harvest of organic lettuce and headed for the local farmer's market in Bellingham, Washington. His little produce stand had no umbrella, and as the hours dragged by, his precious greens shriveled in the summer sun. After a long, hot day, Jesse trudged home with only seven dollars in his pocket -- and crates of unsold wilted lettuce in his truck.
That was four years ago, when Jesse Williams was just 16. These days, he makes enough money growing organic vegetables to pay most of the bills on his small farm a few miles south of the Canadian border. The question for Jesse -- and for hundreds of young farmers all around the country -- is whether organic farming has enough of a future to support a family and a lifetime of living lightly off the land.
Jesse's grandfather was a lawyer, but Jesse's father, Dusty, turned tail at the thought of working in an office. "I was a child of the '60s," says Dusty Williams, "and tilling the soil was more consistent with my values."
As he and his wife raised young Jesse, they tried conventional farming, using chemical fertilizers and pesticides to grow peas for a cannery. But like most small farmers, Dusty Williams watched the cost of chemicals rise as the price paid for produce plummeted. Eventually, the pea cannery left town.
*read the full article here