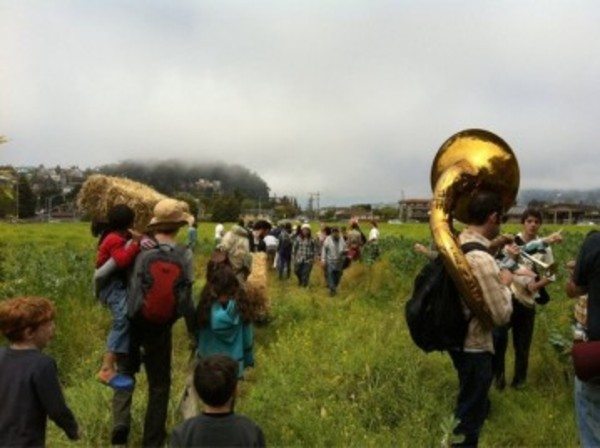 Albany, Calif., April 22, 2012 – Occupy the Farm, a coalition of local residents, farmers, students, researchers, and activists are planting over 15,000 seedlings at the Gill Tract, the last remaining 10 acres of Class I agricultural soil in the urbanized East Bay area. The Gill Tract is public land administered by the University of California, which plans to sell it to private developers.
For decades the UC has thwarted attempts by community members to transform the site for urban sustainable agriculture and hands-on education. With deliberate disregard for public interest, the University administrators plan to pave over this prime agricultural soil for commercial retail space, a Whole Foods, and a parking lot.
"For ten years people in Albany have tried to turn the Gill Tract into an Urban Farm and a more open space for the community. The people in the Bay Area deserve to use this treasure of land for an urban farm to help secure the future of our children," explains Jackie Hermes-Fletcher, an Albany resident and public school teacher for 38 years.
Occupy the Farm seeks to address structural problems with health and inequalities in the Bay Area that stem from communities’ lack of access to food and land. Today’s action reclaims the Gill Tract to demonstrate and exercise the peoples’ right to use public space for the public good. This farm will serve as a hub for urban agriculture, a healthy and affordable food source for Bay Area residents and an educational center.
“Every piece of uncontaminated urban land needs to be farmed if we are to reclaim control over how food is grown, where it comes from, and who it goes to,” says Anya Kamenskaya, UC Berkeley alum and educator of urban agriculture. “We can farm underutilized spaces such as these to create alternatives to the corporate control of our food system.”
UC Berkeley has decided to privatize this unique public asset for commercial retail space, and, ironically, a high-end grocery store. This is only the latest in a string of privatization schemes. Over the last several decades, the university has increasingly shifted use of the Gill Tract away from sustainable agriculture and towards biotechnology with funding from corporations such as Novartis and BP.
Frustrated that traditional dialogue has fallen on deaf ears, many of these same local residents, students, and professors have united as Occupy the Farm to Take Back the Gill Tract. This group is working to empower communities to control their own resilient food systems for a stable and just future – a concept and practice known as food sovereignty.
Occupy the Farm is in solidarity with Via Campesina and the Movimiento Sin Tierra (Landless Workers Movement).
The Gill Tract is located at the Berkeley-Albany border, at the intersection of San Pablo Ave and Marin Ave.
• Join us: Come dressed to work! We need people to help till the soil, plant seedlings, teach workshops, and more.
• Donate/lend: We need shovels, rakes, pickaxes, rototillers, drip irrigation tape, gloves, hats, food, and anything else farming related!
• Monetary donations can be sent through our website at www.takebackthetract.com