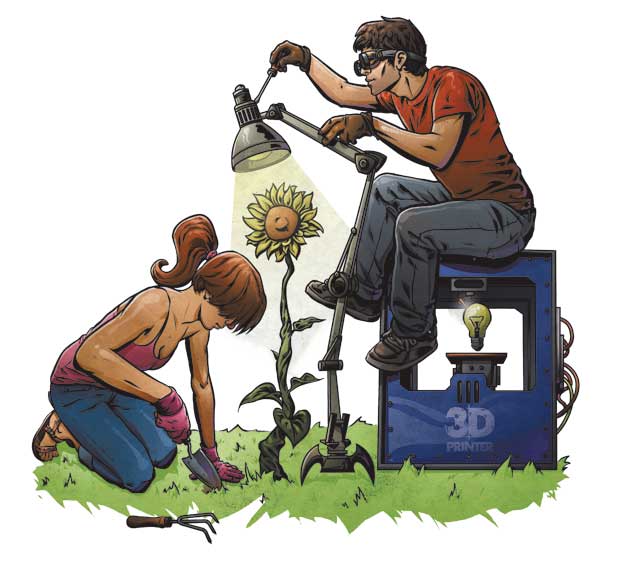 Meet Your Makers
Vermont hackers, artists and inventors are sharing ideas — and solving problems
By Megan James [07.03.12]
Remember when geeks were uncool? John Cohn does. The 52-year-old IBM fellow recalls the disapproving look people shot him when, growing up, he told them he wanted to be an engineer. “I’ve spent my whole adult life trying to get other people interested in geekiness,” he says.
Looks like it worked — the Age of the Geek has arrived.
With the advent of the internet, open-source software, and increasingly affordable and accessible high-tech tools, making stuff isn’t just possible; it’s hip. Evidence of both qualities is in the pages of Make magazine, where readers find slouch-detecting belts and Star Wars deck chairs. You’ll even find instructions for do-it-yourself space exploration using homemade satellites. Yes, really.
Vermont’s “makers” — a term that originated in the early 2000s, meaning any amateur or professional inventor of physical objects — are farmers, programmers, artists, educators and kids. Whether they’re dreaming up Roomba-style contraptions to scare the deer from their fields or creating sound installations for a gallery, makers have a few things in common: curiosity; a renegade, DIY spirit; and a willingness — even eagerness — to share.
“The whole idea is that you give freely of your ideas,” says Cohn.
“There’s always been a core group of makers in Vermont, but they may not have called themselves makers,” says Eric Hall, an active member in the newly formed Vermont Makers community. “I worked with a man who smelted his own metal to make a cannon from scratch.”
Thanks to the formation of Vermont Makers; the unveiling of the University of Vermont’s new fabrication laboratory, or “fab lab”; and the announcement of a Champlain Maker Faire in September, the state’s makers have been emerging, sharing ideas, collaborating on projects and developing physical spaces where they can work together.
read the full article HERE