This computer-generated image shows what Portland’s Back Cove would look like after a rise in sea level (Natural Resources Council of Maine).

According to a report this week in Slate, a team led by the former lead NASA scientist on climate change is now forecasting a much more rapid and dramatic rise in sea level than was previously expected.

James Hansen’s 16-person team of researchers has concluded that, as Slate reports, “glaciers in Greenland and Antarctica will melt 10 times faster than previous consensus estimates, resulting in sea level rise of at least 10 feet in as little as 50 years.”

The publication acknowledges that the latest study has not yet been peer-reviewed — a step in which third-party scientists look over the research and vet it.

The Washington Post reports that while previous baseline sea-level forecasts by the United Nations’ Intergovernmental Panel on Climate Change are, by contrast, often described as too conservative, the Hansen study is being criticized as going too far in the other direction.

Kevin Trenberth of the National Center for Atmospheric Research told the newspaper “there are way too many assumptions and extrapolations for anything here to be taken seriously other than to promote further studies.”

But other scientists, while stopping short of calling the Hansen study a sure thing, have been more forgiving in their outside assessment of it.

“If we cook the planet long enough at about two degrees warming, there is likely to be a staggering amount of sea level rise,” Michael Oppenheimer, a geosciences professor at Princeton University told the Washington Post. “[The] key questions are when would greenhouse-gas emissions lock in this sea level rise and how fast would it happen? The latter point is critical to understanding whether and how we would be able to deal with such a threat.

“The paper takes a stab at answering the ‘how soon?’ question but we remain largely in the dark,” he continued.

In Portland, for instance, talk has already begun of what varying sea-level rises could do to properties in the city. The Portland Society for Architecture released a report estimating that a two-foot rise in sea level by 2050 would do $33 million in damage to current buildings along the city’s waterfront — and heavily traveled — Commercial Street, and that four feet in sea-level rise by 2100 would do $111 million in damage.

Those estimates were based on the aforementioned U.N. panel numbers, which Penn State glaciologist Richard Alley recently described as “well on the optimistic low-rise side of the possible outcomes.”

“Even in weather that’s not that bad, areas of Commercial Street are already seeing water coming very close to buildings,” JT Lockman a top official with Catalysis Adaptation Partners, which helped develop the PSA report, said at the time of its 2013 release. “I’ve taken pictures near Back Cove where seawater is coming up through the drains even on nice days.”

If you’re curious where the Maine coastlines would be redrawn if these sea-level rise forecasts come to fruition, the Natural Resources Council of Maine released a series of such maps nearly a decade ago now. These maps, included below, consider sea-level rises of each 1 meter, or about 3.3 feet, and 6 meters, or nearly 20 feet.

To gauge the coastline as foreseen by the Hansen study, you’d have to look approximately halfway between the two NRCM lines. The council also placed markers on its maps to indicate where schools, libraries, hospitals, police stations and fire stations are, so readers could determine which of their local landmarks would be underwater. 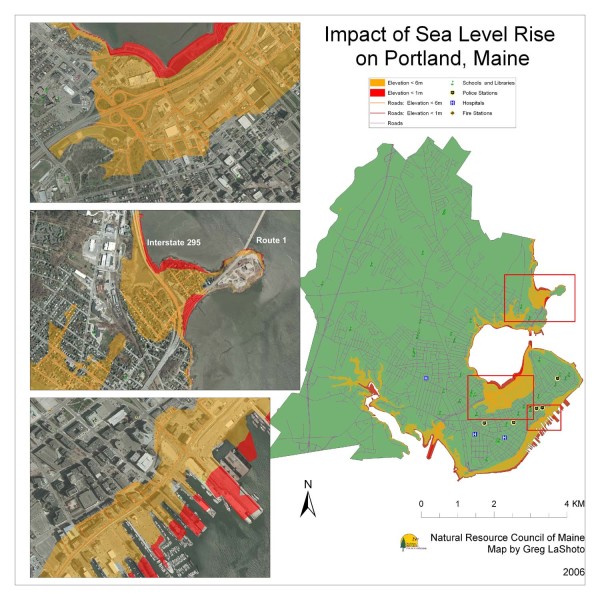 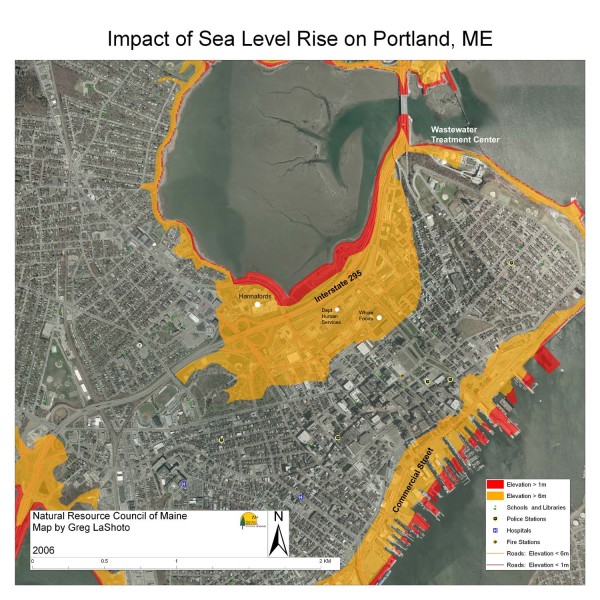 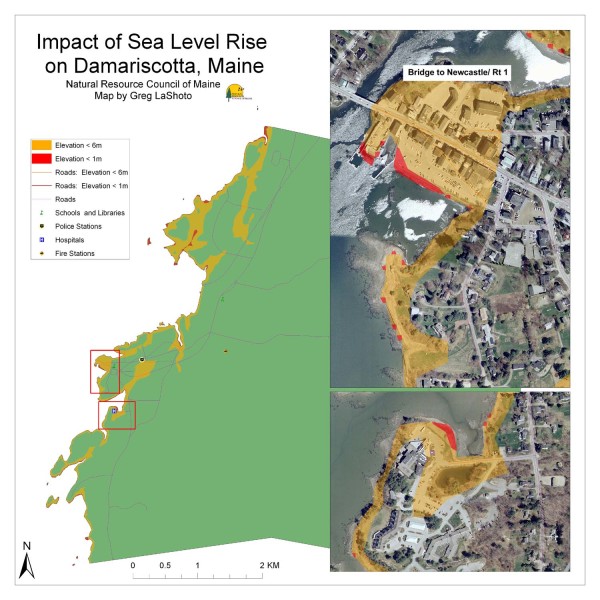 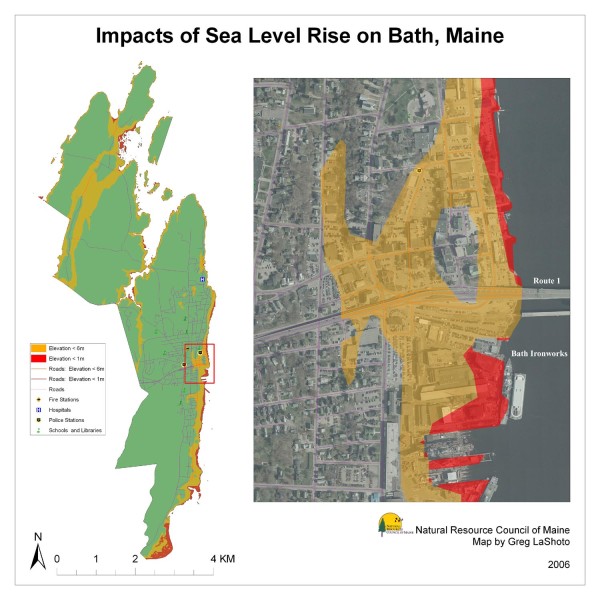 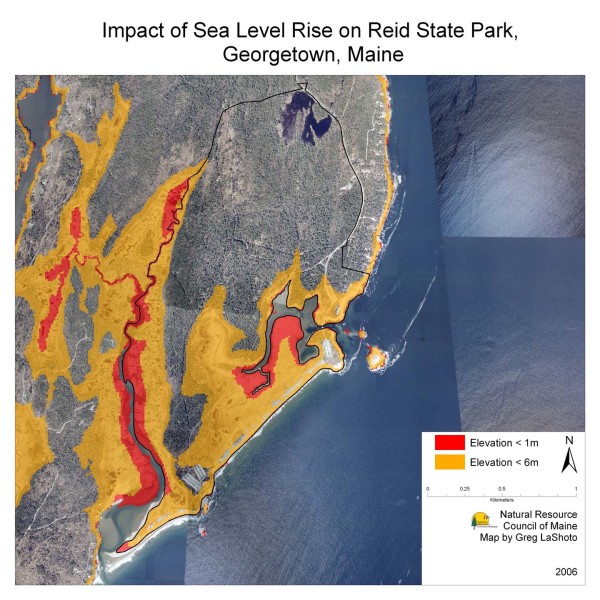 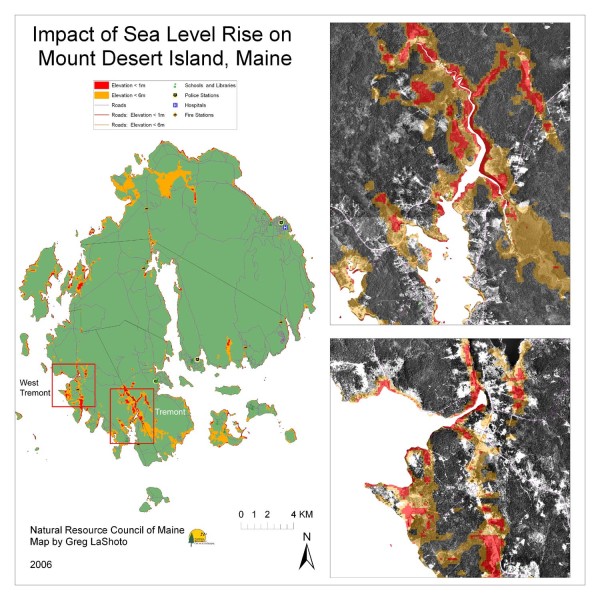 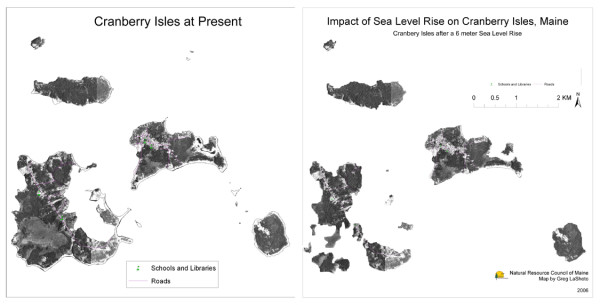 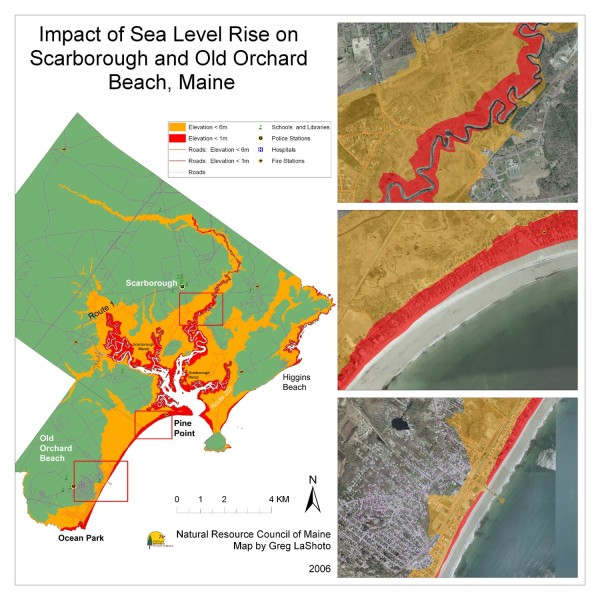 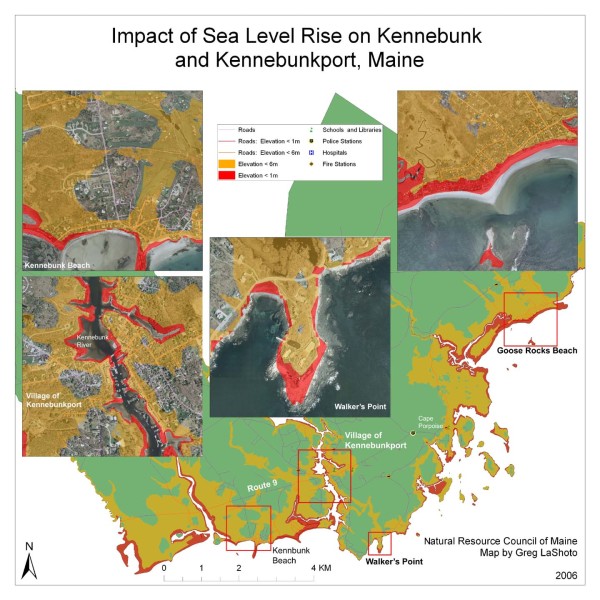 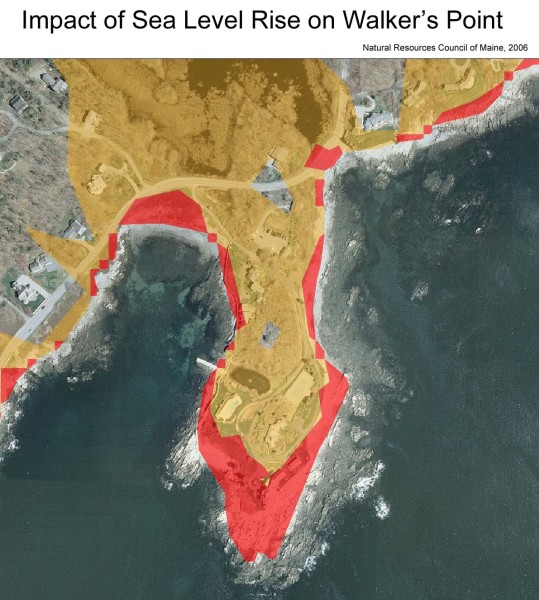