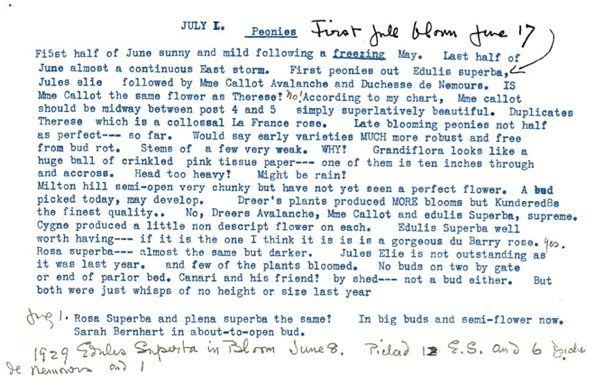 After the publication of Etiquette in 1922, Emily Post quickly became known as a director and authority on the finer points of human interaction. But Emily Post’s role as a cultivator was not limited to the field of social life. The gardens of her Martha’s Vineyard cottage remain today a living testament to her devotion to the value of subtle details, which she demonstrated in her better-known projects on etiquette. As with writing, Emily became deeply and emotionally invested in the process of gardening, her personality and inspiration emerging in the growth of her yard. Gardening was a hobby turned creative endeavor, a process of mourning, a tourist attraction, and above all, a passion that Emily was to pursue for the rest of her life.
Emily bought the cottage at 34 Fuller Street in 1926 and spent the next year preparing to remodel the property with one of her two sons, Bruce. With Bruce continuing the family tradition in architecture, the Posts had eyes for intelligent design and landscaping. The two developed plans into early 1927, yet Bruce would not see the cottage grow into the vibrant summer retreat it was to become. In February of that year, Bruce suffered from stomach pains that rapidly developed into a fatal case of appendicitis. The loss was devastating. After months of overwhelming and isolating grief, Emily began to mourn by wholly devoting herself to her work. One of her new personal assignments was to build the garden at the Fuller Street cottage. In Bruce’s absence, Emily was left as the sole designer of her plot, yet his memory remained an integral part of its development. Her at once aesthetic and functional plans echoed her late son’s architectural frame of mind, and with this attention, the newly-planted flowers of early spring 1927 began to restore life once again after a bleak winter.
Emily’s gardening scrapbook reveals the meticulous planning and emotional investment she dedicated to her plot, beginning in 1927 but continuing years into the project she would pursue until her own death in 1960. The scrapbook, a hefty tome of thick drawing paper with a spine hand-marked “Garden Book,” opens with a blueprint of the property, red ink and colored pencil designating the various times at which sunlight falls throughout the house and yard. Loose letters, informative articles, receipts for seeds and images of blooming flowers fit between the pages filled with her own notes. Emily tracked the weekly progress of her plants in diary-style entries, demonstrating her excitement for the garden’s growth: “Clumps of Sweet William thick as fur!!” The second half of the book becomes a handmade encyclopedia of flowers complete with color charts and diagrams of arrangements. From these pages, Emily emerges not only as a discerning architect, but also as an attentive artist.
As she nurtured the thorny web of the social sphere, Emily Post ardently cultivated her own gardens with the same attention to the intricacies and nuances of the plant world as well as the human. Her enthusiasm for her garden additionally reveals her zeal for life: an active endeavor to preserve the memory of lives lost by improving, sustaining, nourishing the life before her.