king corn boys -- at it again.

Our only comment: Boys! Get some Land!
Drive Through: A Truck Farm Grows in Brooklyn
by Curt Ellis
When my buddy Ian suggested we turn his ’86 Dodge half-ton into a planter, I thought the pickup had finally blown its engine. 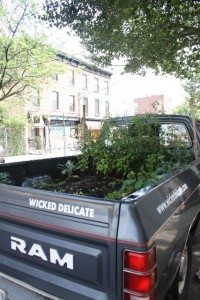 When Ian said he intended to keep the old truck on the road in Brooklyn, I figured he’d blown his.
But now, four months later, we’ve got ripe tomatoes growing in the bed (a gas station attendant ate the first one last weekend), and the transmission is going strong. Truck Farm, as we at Wicked Delicate call her now, is a mobile CSA, with twelve (increasingly skinny) paying subscribers.
The gray Dodge has already given us a bumper crop of arugula, lettuce, broccoli and herbs, and our habanero plants are rooting nicely. Most importantly, Truck Farm is sprouting a steady supply of interested neighbors. They pull weeds, add water, only occasionally steal parsley, and leave behind a calling card of plastic animals: toy cows and chickens that graze contentedly among the nasturtiums. Part garden, part art installation, Truck Farm is getting invited to way more summer barbecues than its owners.
I like to think that the project’s curb appeal goes beyond its novelty (and if you’ve seen TheWhoFarmMobile or the Waterpod you know it’s not that novel). The desire to grow food in the city goes back to Babylon and beyond: there’s a mental satiety that comes from starting a recipe when you plant a seed.
Now, our veggie truck wasn’t meant to be a model for any larger fleet of four-wheeled farmland (though a conversion craze might be Detroit’s last hope). We wanted it to be a showcase for urban agriculture of the low-carbon variety. On a recent trip to Added Value, adolescents from across Brooklyn were washing lettuce and harvesting collards at Red Hook Community Farm. “I used to drink a lot of soda,” one said. “But since I started at the farm, I’ve changed what I eat.” Added Value’s opening-day market was rich in low-cost, high-quality produce, most of which had traveled less than 50 feet from farm to table.
Later, at Greenpoint’s Rooftop Farms, E-Trade ex-pat Ben Flanner showed us how New York’s decimated agricultural lands could be restored, four stories up on a Brooklyn warehouse. With a Manhattan skyline in the background, butterflies flirted with the tomato blossoms and Ben took orders for zucchini by cell-phone.
Admittedly, the patchwork farms and gardens sprouting up like weeds in the sidewalk cracks around New York these days may be a ways off from feeding us all, but I think they’re bringing our food system something it sorely needs: a dose of fun.