The mainstream press is catching on:
'Natural patterns' of farming touted in documentary
By Joshua Hatch, USA TODAY
SWOOPE, Va. - The white metal sign over the desk at Polyface Farm reads, "Joel Salatin: Lunatic Farmer."
Salatin is proud of that label. "I'm a third-generation lunatic," he boasts while standing in his lush, green central Virginia fields. Brown chickens strut and peck around his feet. "I don't do anything like average farmers do," he says.
What the 52-year-old farmer does is let his cows feed on grass instead of corn or grain. He moves his cows to new fields daily. Flocks of chickens scratch around open fields, spreading cow droppings, eating flies and larvae, and laying eggs in the Salatin-built eggmobile. Hogs forage in the woods or in a pasture house where they root through cow manure, wood chips and corn. The resulting compost gets spread back over the fields, fertilizing the grass for the cattle. That completes the cycle. 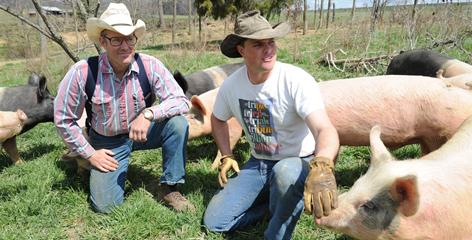