It Takes A Village

Well. Many of you have been asking how our pig event was.  Honestly, it took us a few days to digest the weekend, and the pork. Now that our many brilliant photographers have edited and uploaded their photos, and we're ready to fill you in.  We think the pictures say quite a bit. 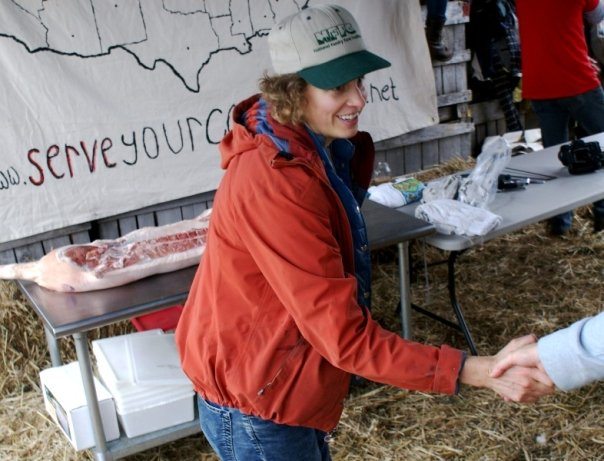 Photos + More Photos + Even More From Trace Ramsey of Cricket Bread
Photos From Meaghan Murphy of Hudson Valley Food Network
and there are more to come, from a few photographers who are still honing 900+ images of it all.
It was glorious bacchanal, with a sweet portion for the freezer as well. We cut down the pigs, one half at a time. Handsome butcher Bryan make short work of the primals, with just enough banter from the crowd ( and a bit of cat calling). He dispatched the trotters with deft strokes.  Superchef Daniel Meyer ran the kitchen - bellies were roasted in milk and honey and raw cider, tenderloins were shredded and sauteed with prunes and onions. We made a chili chocolate sauce, which we remembered at midnight and passed around with slices of belly.  We smoked a ham and a shoulder in Daniel's homemade smoker.  The smoker ultimately went up in flames, but the meat was quite amazing. Perhaps the highlight of the weekend was when our new friend Lauren fried homemade donuts and apple fritters in a cauldron of lard which our new friend Melissa had carefully rendered over a campfire.  Oh my.
Many thanks to Derrick Mead & the crew at Mead Orchards for generously donating time, space, dozens of bales of hay and a LOT of firewood.  To the folks at Strongtree Coffee who caffeinated us on Sunday Morning, and to the poets, pastry chefs, writers, photographers, interns, butchers, activists and friends who pitched in to make it all happen. And, of course, to the pigs.
Overall lesson; Pigs are fantastic from start to finish. I raised these ladies from the size of kittens unto belly fat glorious 200+ pounds. So much meat from a pig, such an intelligent, easy to feed+ love animal. So much belly!
We were all of us crouching, greasy-faced in front of the campfires. Rendering lard, gnawing on grilled ears. It was like lord of the flies, except no injuries- and less beastliness. In fact it was fantastic to see how the pig village forming, like a crystal around the tasks at hand: harveting turnips, delivering apples, building the wickerman, grinding the fat, wrapping the sausages. We biked and hollered and sang out to the moon rising above the orchard.