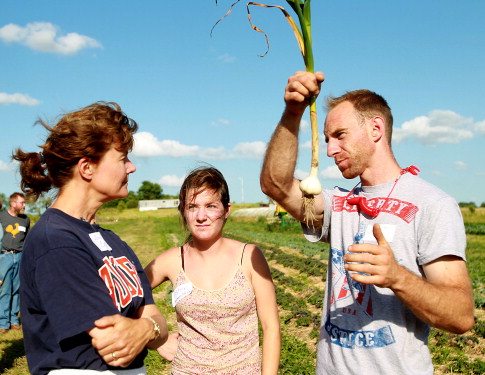 Farmers brainstorm simple tools to make their work easier
June 20, 2012 in The Gazette
IOWA CITY — Carolyn Scherf wants to harvest her peas while lying down.
On Wednesday, the Solon-based vegetable farmer and 20 other local farmers and engineers attended the first day of Farm Hack Iowa — a two-day event at the Iowa Memorial Union — to discuss simple solutions to small farm issues.
“If you are eight hours into the day and have four hours to go, then something like this might be nice to have,” Scherf said of her group’s initial design for a small, man-powered contraption in which a farmer would lay prone in and harvest crops from above.
Farm hacks — which were started in 2011 by the National Young Farmers’ Coalition — have been held across the Northeast, but Wednesday’s event was the first hack in the Midwest.
read the full article HERE