if you happen to be southern

you probably already know about the Ponderosa Swamp.  9th annual coming up this month! 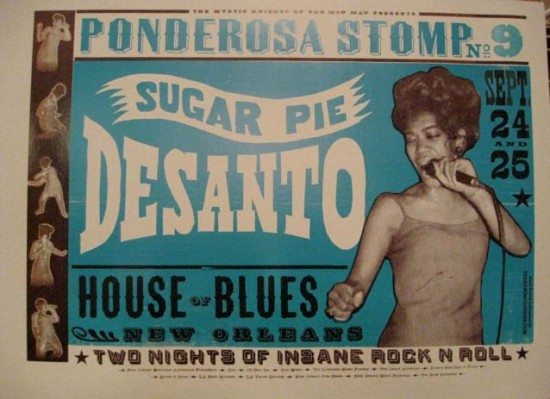 When a group of music fans banded together to bring the true heroes of rock and roll back to the stage to play again, we called ourselves The Mystic Knights of the Mau-Mau. The Knights later founded the Ponderosa Stomp Foundation (MK Charities, Inc) as a 501(c) 3 cultural organization dedicated to preserving and presenting the rich history of American roots music. Through festivals, special events, concerts and outreach activities featuring musical living legends, we honor influential artists and educate audiences about their massive contributions to American culture.

OUR MISSION
Our primary annual event, the internationally revered Ponderosa Stomp, exists to celebrate, pay tribute to, and teach the cultural significance of the unsung heroes and heroines of rock-n-roll, rhythm & blues and other forms of American roots music while they are still alive. The Stomp festival and its year-round activities provide both a voice and career revival to overlooked sidemen, session musicians and other influential pioneers whose contributions have shaped American culture for over 50 years.
PONDEROSA STOMP
The Ponderosa Stomp is an American roots music festival dedicated to recognizing the architects of rock-n-roll, blues, jazz, country, swamp pop, and soul. Founded in New Orleans and produced by the non-profit Mystic Knights of the Mau Mau, a diverse group of music fanatics who have presented over 50 concerts with over 200 musical legends, the Stomp always succeeds in exposing rare musical icons to their adoring fans and to new audiences. The Stomp itself has now become legendary in reviving careers and giving a new lease on musical life to so many performers.
More on the 9th annual Ponderosa Stomp in 2010
NEW ORLEANS HERITAGE
The Ponderosa Stomp was founded in New Orleans, Louisiana, a place whose overwhelming musical heritage and influence remains a focal point of the festival. The Stomp traditionally takes place between the two weekends of the city's world-famous New Orleans Jazz & Heritage Festival. The 9th annual Ponderosa Stomp takes place in New Orleans at the House of Blues on September 24th and 25th, 2010.
HOW YOU CAN HELP
Please support our musicians, come to our shows, and consider making a tax deductible donation online. Use the Donate button to make a secure, online donation with a major credit card or via Pay Pal.