Our friend Ida has a solo show in Hudson, NY, opening this weekend. 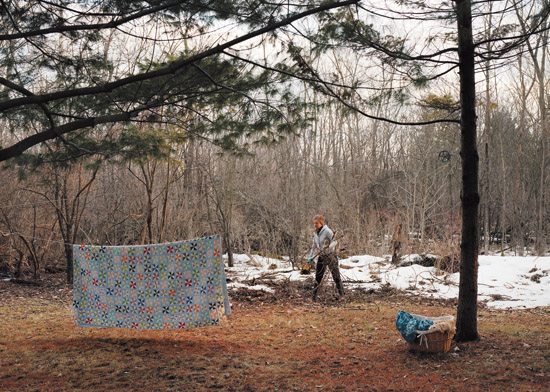 Carrie Haddad Gallery in Hudson, New York from March 11th-April 18th
Opening reception is this Saturday, March 13th 6-8pm.
WALKING HOME
In the large format photographs presented in this exhibit, Ida Weygandt uses the landscape to expand on her themes of interior world aligning with exterior, of the interconnection between nature and self and the concept of home. “My interaction with the landscape has always been very strong,” Weygandt says. “I am always absorbing the elements around me.”

And, in turn, the elements absorb her, taking her in, making her at home. In some of the photographs Weygandt herself appears, tucked into the foliage or brush, as with the figure we see reaching into the bramble, in The Thicket. In Apple Grove, she stands almost hidden, with head tilted upwards, the blue of her shirt peaking out from the surrounding goldenrod. She hugs an empty basket to her hip; the tree she contemplates is bare. We sense she has a purpose and we wonder about her next move.
Whether or not she physically appears as a component in the landscapes, Weygandt uses texture and light to reflect and enlarge on the wider landscape she sees. Each image, with or without the figure, is about both interior and exterior, the self and the land. Her images confront uncertainty or comfort with precision and composure, allowing the viewer to walk in, as she does, and experience the space with her.
Weygandt’s recent images of the Atchafalaya River Basin in south central Louisiana, continue to explore natural habitats facing some kind of threat. Seeking out a different landscape – a water driven territory rather than her more familiar land oriented environments – and drawn to a place that has so changed in the last decade, where so much has been extracted from it and so little returned, Weygandt traveled with her camerato the Atchafalaya - the largest river basin swamp in North America, wanting to capture this great natural resource, even as it is quickly disappearing.
On her walks through these various landscapes, Weygandt immediately begins plotting her return. With her following visit, she is back out in the land accompanied by her large format camera, knowing ahead of time how she will be part of the composition. But what she's never quite sure of is whether or not the land will be the same once she arrives.