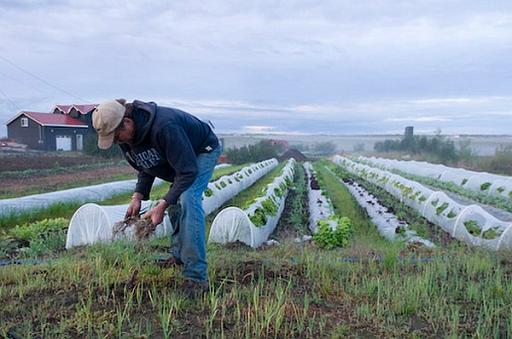 But tapping that ultra-rich soil takes time. To prepare the land for farming, Meyers starts in June when the permafrost ground begins to melt a bit. He uses a tractor to clear the low-lying mossy lichen and other tundra plantlife that act as an insulator to keep the permafrost cold. Then, in July, he plows fields to loosen the soil and dislodge the remaining native plant roots.
In all, Meyers must spend as much as two years working a piece of land before he can plant it. And even then, the ground below the soil in which he farms is still ice.
Leif Albertson, who worked for Meyers for three summers prior to his current post as a Bethel-based extension agent for the University of Alaska, says Meyers' farm is as magical as "Willy Wonka's chocolate factory. " Visitors can transport themselves from the tundra to the jungle just by stepping into one of Meyers' greenhouses. It could mean a difference of 40 degrees between the chilly tundra air and in the greenhouse.

If you're curious about learning more, check out Meyer's Farm website, which has photos, press, and audio from an interview with the farmer.