greenpeace has released a new report

on Nestle's actions in the rainforests of Indonesia.  You can download the full report HERE. 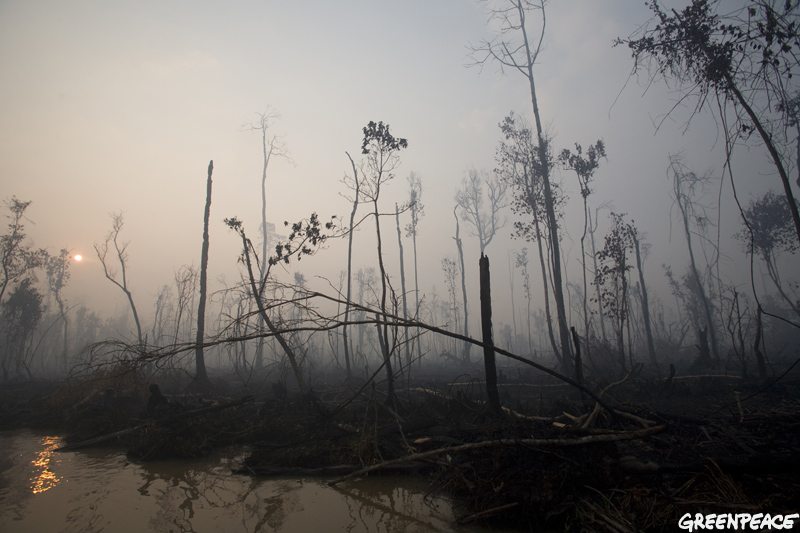 Nestlé uses palm oil to make a wide array of its products including Power Bar, Coffee Mate, Nestle Crunch Crisp, and Maggi Soup mixes. In the last three years, Nestlé’s use of palm oil has nearly doubled.
A growing demand for palm oil globally is fueling the destruction of rainforests in Indonesia to make way for expanding palm plantations. Fire is often used to clear forests, causing massive, polluting blazes. Illegal canals are cut into ancient peatlands, draining water and releasing methane and other potent greenhouse gases.
Click here to tell Nestlé to stop destroying rainforests for palm oil
The destruction of Paradise Forests is taking place at a break-neck pace. In 2007, Indonesia received a World Record from the Guiness Book for the worst deforestation rate in history. Meanwhile, the greenhouse gas emissions stemming from forest and peatland destruction has made Indonesia the world’s largest climate polluter after China and the United States.
The expansion of palm oil plantations is also putting people directly at risk. Much of the forest and peatland destruction is illegal, running over the rights and livelihoods of local communities and indigenous peoples who have depended on Paradise Forests for thousands of years.
On top of that, dwindling habitat is pushing sensitive wildlife like Sumatran tigers and critically endangered orangutans closer to extinction.
Sinar Mas: Notorious Forest Destroyer
Sinar Mas is the largest producer of palm oil in Indonesia. It supplies many food, drink, cosmetic and biofuel companies worldwide, including Nestlé. Sinar Mas is also breaking Indonesian law by clearing protected forests for its palm oil plantations.
The Greenpeace report “Caught Red-Handed: How Nestle’s Use of Palm Oil is Having a Devastating Impact on Rainforest, the Climate and Orangutans” exposes the links between Nestlé and palm oil suppliers, including Sinar Mas, that are expanding their plantations into carbon-rich peatlands and rainforests.
None of this should come as a surprise to Nestlé. Greenpeace has contacted the company with evidence of Sinar Mas’ destructive practices many times. Despite this, Nestlé continues to use Sinar Mas' palm oil in its products internationally. Other leading companies have stopped buying from Sinar Mas as a result of its shocking environmental and social practices. Food and cosmetics giant Unilever canceled a $30 million dollar contract in 2009, while Kraft canceled its contract with Sinar Mas in February of 2010.
Bottom line: It is time for Nestlé to stop buying palm oil that comes from rainforest destruction. As the largest food and drink company in the world, Nestlé should be setting an example for the industry and pushing for the protection of Paradise Forests.
For a list of Nestle products, click HERE