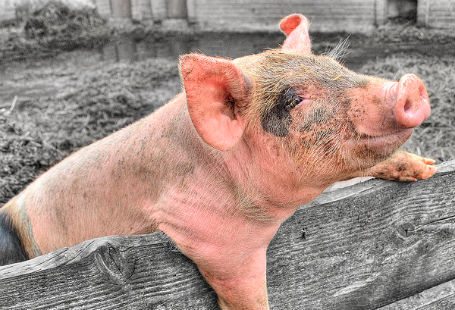 WINNIPEG, Manitoba (Reuters) - Pigs that might have become the world's first genetically modified animals approved for human consumption may instead face an untimely end, as key backers of Canada's "Enviropig" project withdrew their support for the controversial engineered animal.
Scientists at the University of Guelph, 90 km west of Toronto, bred the first GMO pig that was developed to address an environmental problem in 1999. The animal - known as Enviropig - digests its feed more efficiently than naturally bred pigs, resulting in waste that may cause less environmental damage to lakes and rivers.
The project has produced eight generations of Enviropigs, including the current herd of 16 animals. But they may be the last of their kind, after Ontario Pork - an association of hog farmers in the eastern Canadian province - yanked their funding last month.

"We think we took the genetic research as far as it could possibly go," said Keith Robbins, spokesman for Ontario Pork, which funded Enviropig with more than C$1 million ($1 million) since the late 1990s. "It's probably best for industry to take it forward. When you're the first of anything, it's tough to get it out of the gate."
Genetically modified plants and animals intended for the food chain face tough scrutiny from regulators, with some consumers leery of unproven long-term health effects.
"All biotech products face a daunting task of getting to market," said Peter Phillips, a professor of public policy at University of Saskatchewan.
Enviropig has not managed to attract funding from a food company that would ultimately seek to commercialize the pigs, possibly because environmental benefit doesn't necessarily translate into more profit, Phillips said.
Enviropig's researchers applied several years ago for approval for human food consumption from the U.S. Food and Drug Administration and Health Canada. Those regulators have not made a decision.
Unless the university finds a fresh source of major funding it will euthanize the animals and place their genetic material in cold storage, said Lori Bona Hunt, a spokeswoman for the University of Guelph.
Research could continue without live animals, mainly through analyzing data, she said.
Canadian environmental groups welcomed the setback for the Enviropig.
"The GM pig was going to drive consumers away from eating pork if it was ever approved for market," said Paul Slomp of the National Farmers Union, in a statement. "This GM pig fiasco could have permanently damaged (Canada's) domestic and international pork markets."
Canada is the third largest pork exporter.
Environmentalists are also closely watching applications by AquaBounty Technologies' engineered Atlantic salmon, which contains a gene from another fish species, the Chinook salmon, to help it grow twice as fast as normal.
(Reporting by Rod Nickel in Winnipeg)
41.995092-73.875411
red hook, new york