we think this would be best viewed in a field on a farm .  anyone planning sleepovers? 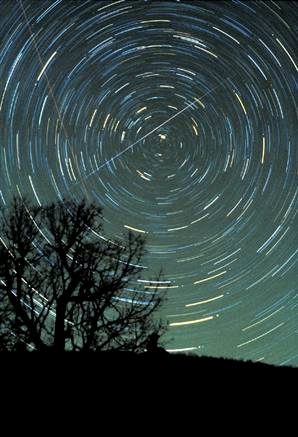 Dec. 8, 2009: Make hot cocoa. Bundle up. Tell your friends. The best meteor shower of 2009 is about to fall over North America on a long, cold December night.
"It's the Geminid meteor shower," says Bill Cooke of NASA's Meteoroid Environment Office. "and it will peak on Dec. 13th and 14th under ideal viewing conditions."
A new Moon will keep skies dark for a display that Cooke and others say could top 140 meteors per hour. According to the International Meteor Organization, maximum activity should occur around 12:10 a.m. EST (0510 UT) on Dec. 14th. The peak is broad, however, and the night sky will be rich with Geminids for many hours and perhaps even days around the maximum.
Cooke offers this advice: "Watch the sky during the hours around local midnight. For North Americans, this means Sunday night to Monday morning."
Researchers are interested to see what the Geminids do in 2009. The shower has been intensifying in recent decades and they wonder if the trend will continue.
Geminids are pieces of debris from a strange object called 3200 Phaethon. Long thought to be an asteroid, Phaethon is now classified as an extinct comet. It is, basically, the rocky skeleton of a comet that lost its ice after too many close encounters with the sun. Earth runs into a stream of debris from 3200 Phaethon every year in mid-December, causing meteors to fly from the constellation Gemini
More information here