we just found out about this movie - Flood.  Watch the teaser here 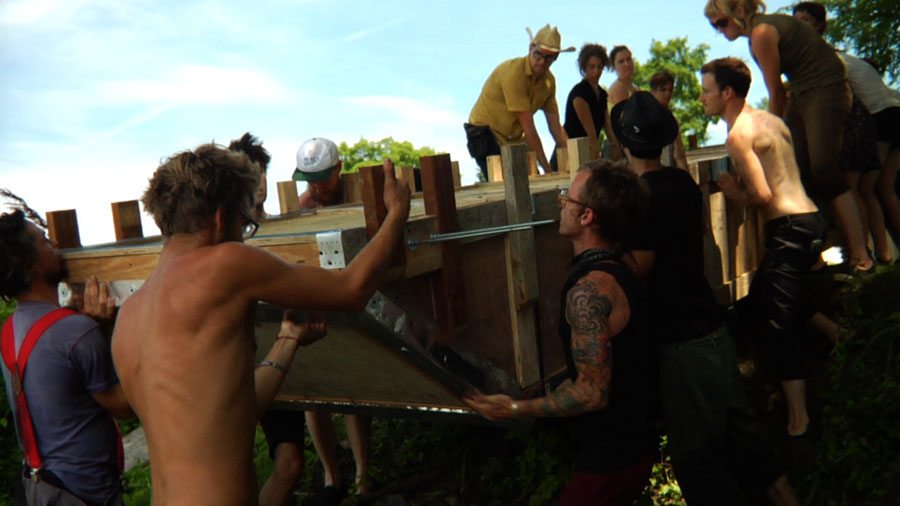 FLOOD is an experimental narrative film about a journey down a river in the midst of ongoing economic and ecological collapse. The film tells the story of a group of friends who, driven by dreams, desperation, and a sense of adventure, decide to build a boat out of scrap material. As they begin to build more people gather at the river, assembling vessels out of the trash that surrounds them. Inspired, but uncertain, they set out down the river to make a new life for themselves.
FLOOD blends narrative, cinema verite, and improvised experimental film. The film was shot amidst the artist Swoon’s 2008 Swimming Cities of Switchback Sea project, in which seven homespun boats were built and crewed by an eclectic group of artists and performers. The boats floated down the Hudson River staging performances in towns along the way.
The film is loosely structured around the journey and largely improvised by non-actors playing themselves with fictionalized trajectories. The primary cast includes the bands Dark Dark Dark and Fall Harbor, members of which were actual crew on the boats. The bands will be collaborating to write, perform and record the film's musical score.
In addition to more conventional screenings and festivals FLOOD will tour museums, theaters, galleries and community spaces with a live musical score performed by members of Dark Dark Dark and Fall Harbor.