is about pixie tangerines. there is a lot of agribusiness spinny happy talk in this series ( note the sponsors: Monsanto and the American Farm Bureau Federation) but its interesting to watch that spin from the comfort of a homegrown tomato salad. 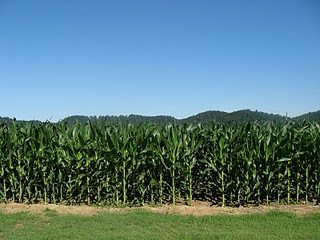 In five full seasons, America's Heartland reporters and crews have brought in stories from all across our great nation. Season 4 completed our first "tour" of all 50 states. In season 5, we achieved a major milestone: our 100th episode! All across the U.S, we've discovered unforgettable people and places in the world of agriculture. In fact, our quest to discover the influential and positive world of American farming has taken us to faraway places like Taiwan, China, Egypt and Morocco. That’s where we followed the journey of U.S.-produced corn and wheat as it was made into cattle feed and other products, including a new kind of “plastic” cup. We also joined American farmers as they shared their knowledge about food safety, sustainability, and greater productivity with their fellow farmers in the third world.
Back in 2005, we opened our first episode with the line "America's heartland is more than a place; it's a state of mind." More than 100 episodes and 500 stories later, it's still true. Providing food, fuel and fiber for America and the world is an act of passion on the part of our farmers and ranchers big or small, mainstream or specialized. In season five, you'll learn even more about how our ag producers provide us their rich bounty. Our stories take you from Texas to Morocco, Nebraska to Egypt, and aboard planes, trains, and boats! We’ve added to our top-notch reporting team, and of course all of our episodes are in stunning High Definition.
America’s Heartland is a magazine-style, half-hour series produced by KVIE, Sacramento. Sponsors are the Monsanto Company and the American Farm Bureau Federation. The series is a national evolution of California Heartland, a popular and critically acclaimed series KVIE produced for eight years.