drones: coming to a farm near you? 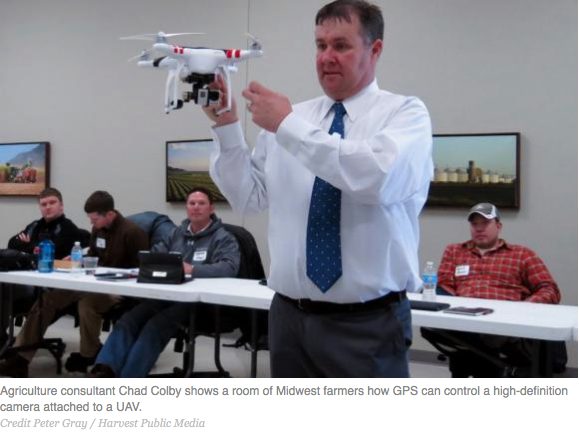 Unmanned aerial vehicles aren’t just for spies or for the battlefield. Farmers all over the country think drones can give them a leg up, too.
Tech-savvy farmers have been waiting for years for the government to make up its mind about the commercial use of unmanned aerial vehicles. Right now, anyone flying a drone for business instead of as a hobby is actually breaking federal law. But the Federal Aviation Administration (FAA), which oversees U.S. airspace, says it plans to roll out rules for drones this year.
Privacy and public safety concerns abound when it comes to camera-mounted machines flying around.   That’s the primary reason the United States lags behind other nations in allowing unmanned vehicles for commercial use.  ,
Still, farmers with acres and acres of land want to keep an eye on their investment. Instead of spending days driving the edges of fields in a truck or ATV, farmers could use drone-mounted cameras to produce thermal image maps that can tell if crops aren’t properly irrigated or if they are being eaten by insects. For the complete article and to listen to the radio piece, click HERE!
This is also a Farm Hack project!