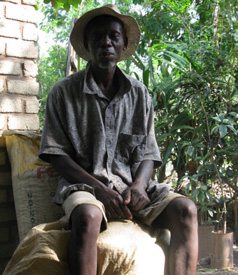 "A new earthquake" is what peasant farmer leader Chavannes Jean-Baptiste of the Peasant Movement of Papay (MPP) called the news that Monsanto will be donating 60,000 seed sacks (475 tons) of hybrid corn seeds and vegetable seeds, some of them treated with highly toxic pesticides. The MPP has committed to burning Monsanto's seeds, and has called for a march to protest the corporation's presence in Haiti on June 4, for World Environment Day.
In an open letter sent May 14, Chavannes Jean-Baptiste, the executive director of MPP and the spokesperson for the National Peasant Movement of the Congress of Papay (MPNKP), called the entry of Monsanto seeds into Haiti "a very strong attack on small agriculture, on farmers, on biodiversity, on Creole seeds ... and on what is left our environment in Haiti."(1) Haitian social movements have been vocal in their opposition to agribusiness imports of seeds and food, which undermines local production with local seed stocks. They have expressed special concern about the import of genetically modified organisms (GMOs).
continue reading @ truthout.