another documentary about young farmers

this time a British take on what we're talking about. Check out their blog here. 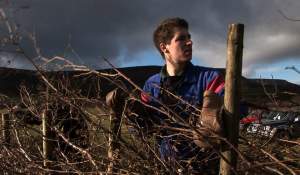 Who Would be A Farmer?
“When it’s the middle of December and it gets dark about half past two, and rain’s coming down horizontal and it’s so cold that the dog goes home — you think, crikey, why the hell am I doing this?” Richard
“Any community is competing on global level. Our lamb is affected by New Zealand, for example. If they had a crash in their market it would affect our prices here.” Christine
“Growing up here, according to my mum, we’d be out in our prams in the middle of lambing. We’ve always been outside whether we’ve known it or not. But growing up here has been really great because you’ve got the open space so we’ve been allowed to run free on the whole. It’s good.” Fay
“We’ve been four years in the caravan through the winters which are extremely cold. But I’m not prepared to give up on my farming dream.” Millsy — trying to get planning permission to build a dwelling on his farmland.
These are some of the voices featured in ‘Young Farmers’, a documentary film being made by Hereford based Cantilupe Projects. And here are some of the statistics from ‘New Blood’ a report published in 2009 by the Royal Agricultural Society of England.
* Only 3% of British farm holders are under the age of 35.
* It is estimated that over the next ten years, 60,000 new entrants will be needed in agriculture.
* £250K of working capital to is needed to take on a 350 acre farm.