someone said this on comfood: "In more and more places there isn't enough money for fixing potholes, much less beautiful landscaping projects." Which 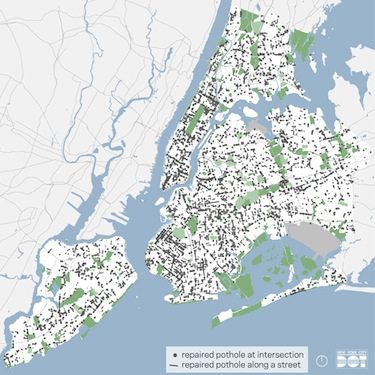 prompted an interesting response from daniel.
Potholes!  One of my favorite topics.
Last time they were mentioned on Comfood was a while back.
http://blogs.reuters.com/shop-talk/2009/03/25/pothole-filling-thats-finger-lickin-good/
Interesting thing that I learned from: Follow That French Fry: Food Miles and Roadway Damage by Texas DOT
(http://fargolocalfoods.net/studies/french_fry.pdf)
Most food in the United States travels a very long way from its point of origin to its point of consumption...typically in trucks that can each cause the same amount of roadway damage as 9,600 cars.
So, if we could better look at the whole system, we might find out that fewer trucks bringing food to cities meant lower pothole filling costs, etc etc...
Meanwhile, here in New York City, somewhat related, the url says it all.
http://www.streetsblog.org/2011/02/17/one-winters-extra-pothole-costs-exceed-price-of-entire-dot-bike-program