a new model for academic calendars

from our friends at Sterling College.
Craftsbury Common, VT—Independent colleges and universities, already under financial strain due to diminished endowments, are now facing calls from politicians and pundits to cost less and graduate students faster, in three years instead of four. 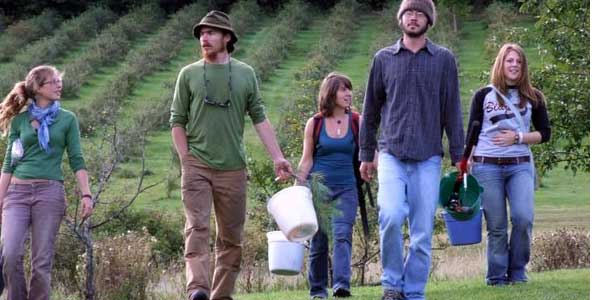 Given the size and complexity of American higher education institutions that’s a little like asking a thousand ship armada to take a sharp turn, then stand on tiptoes. A few colleges are experimenting with allowing a handful of students to take extra courses every semester, up to 19 or 20 instead of the more usual 15. Except for that modest innovation, not much has changed. Until now, when a tiny, environmentally-focused liberal arts college in north central Vermont announced it has developed a different approach.
Beginning in June 2010, Sterling College students will be able to attend college year-round and at a price that will remain frozen for as long as the student remains continuously enrolled.
In inaugurating the “continuous semester” system the Vermont college is breaking new ground in both the cost of higher education and the time it takes to complete an undergraduate degree at a residential college.
The semesters, fall, spring, and summer are separated by three to five weeks of break time, allowing students and faculty time to get away and re-charge. The summer semester consists of two five-week sessions, where students can enroll in just one or both to create a full 12-15 credit semester. Between the sessions is the College’s Rural Heritage Institute, an academic and experiential conference where students can earn additional credit.
Sterling students, numbering just 105, self-design their majors in and around six areas of environmental studies: sustainable agriculture, conservation ecology, outdoor education and leadership, northern studies, natural history, and environmental humanities. Besides being one of the smallest Baccalaureate colleges in the nation, Sterling is unusual in other ways. It is one of only seven federally recognized Work-Learning-Service colleges, and the only one in New England. It also practices “experiential academics” where about half of all study takes place outside a traditional classroom setting.
To qualify for the tuition and fee freeze Sterling students must attend two full semesters and at least half of the third semester, usually, but not necessarily, the summer semester.
“For Sterling, this new academic calendar makes a lot of sense,” said Will Wootton, Sterling’s president. “It will allow us to grow modestly without adding to our infrastructure beyond a new dormitory already under design. It will lower costs to students and families and potentially shorten the time it takes to earn a degree.”
“Conducting a full semester in the summer provides the time and the season for us to considerably broaden our curriculum,” Wootton said. “At the very least, the summer semester will allow more Sterling students to experience summer in Vermont, a worthy thing all by itself.”
The College has been adjusting its curriculum and scheduling for two years, working towards the year-round idea. “We began with a full summer semester in one of our areas of concentration, sustainable agriculture. The first year we had four students – two of ours and two from other colleges. They lived in tents because our summer renter occupied all the dorms.”
“The next year,” Wootton said, “there were 10 students, again a combination of Sterling students and other college students, and again living in tents. Then last summer 14 students attended, housed in one-half of a dormitory and taking their meals in the College’s book store. “We also redesigned and rescheduled some of our academic trips, to Alaska and the Sierras, for instance, to fit the new five-week sessions. And we included a sampling of our humanities courses and opened up independent study options.”
With a growing confidence that the new year-round institution would attract their own students and students from other colleges, especially over the summer semester, Wootton told the summer renter their campus would no longer be available.
“That was our jump,” he said. “Our commitment to this new way of operating on a year-round basis.”
Sterling’s model is considerably different from other recent developments in shortening the time it takes to complete a BA degree, which generally requires students to accumulate at least 120 academic credits over eight semesters. A few institutions are experimenting with a “three year degree” that requires students to take upwards of 20 credits a semester instead of between 12 and 15.
“That’s a good model, in part because it minimizes the complications and anxieties of implementing an entirely new institutional methodology. It doesn’t require students or  faculty to think in a new way about higher education. But I worry that in the long run there will be too few students who can withstand such an intense academic load and benefit from it,” said Wootton. In addition, he said he wonders about the financial sustainability of letting students take additional classes. “Right now the effect is perhaps a couple of extra students in a class, so it costs the institution nothing, really. What happens if a third or half the student body wants to graduate in three years? You’ll need more faculty, more classroom and lab space to handle larger classes. Or you have to limit the program.”
The Sterling idea is to allow all their students the opportunity for year-round study, with an incentive that makes economic sense. The cost freeze is affordable for the college, Wootton explained, because of income derived over the summer semester. “The benefits are both to the college, increasing income and leveling cash flow, and to the student in shortening the time to completion and avoidance of annual tuition increases.”
“We haven’t worked out all the problems,” Wootton said.  “And we have no idea how replicable the model is at other institutions. The more closely you look the more issues and complications arise. American higher education is based on two semesters in a 12-month period, and we’ve just added a third, so it’s a fundamental, and to us an exciting, paradigm shift.”