the united watershed states of america

what if western states were defined by watersheds?
http://communitybuilders.net/the-united-watershed-states-of-america/ 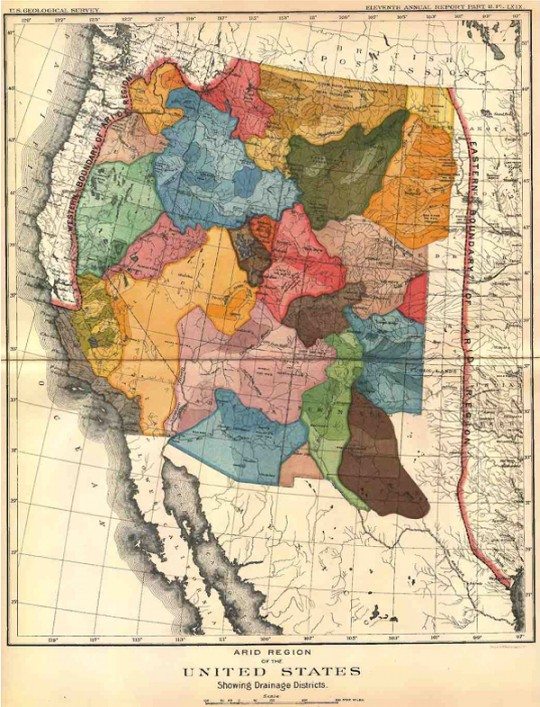 The story begins with John Wesley Powell, the great one-armed adventurer and geologist. He was made famous for his successful runs through the Colorado River in 1869 and 1872. But perhaps his most important legacy rests in a lesser-known deed: Proposing in 1879 that as the Western states were brought into the union they be formed around watersheds, rather than arbitrary political boundaries. This idea rested on the observation that because of an arid climate, a statewide organization decided by any other factor would lead to water conflict down the road. Powerful forces, most prominently the rail companies, were proposing that state’s boundaries be aligned in ways best believed to facilitate agriculture, and thus best be enabled to capitalize off the lands given to them by the Federal Government. But the West, Powell observed, was too dry and its soils too poor to support agriculture at a scale common in the East.
Powell set out to produce a map, shown above, depicting what these “watershed states” might look like. (Take a look at any map of the union today, and you’ll know how successful Powell was). The rail lobby, buoyed by Charles Dan Wilbur and his theory that “rain follows the plough”, successfully swayed congressional opinion to accept state’s boundaries in their contemporary form.
continue reading HERE