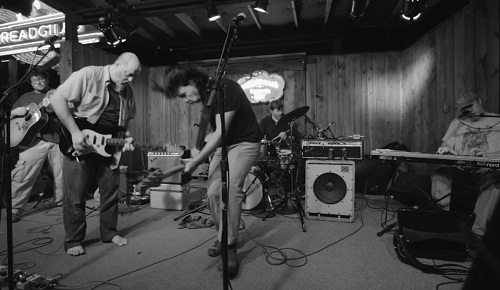 ALL THE LABOR is the story of five Austin, Texas musicians collectively-known as The Gourds.  Kevin Russell, Keith Langford, Max Johnston, Jimmy Smith, and Claude Bernard are some of the hardest working musicians in the business.
We began filming ALL THE LABOR in August 2011 when the band rented an abandoned kitchen in a former mental institution in south Austin to practice the songs Campbell helped them hone back in March. The crew for that first week of shooting included myself, Texas filmmaker, Mike Woolf (MAN ON A MISSION), and Brendan Canty (ASHES OF AMERICAN FLAGS).  Since then a slightly larger film crew has followed the alt-country roots rockers as they toured relentlessly in support of their first major label release.  While all of The Gourds’ critically-acclaimed records deserve the praise they have received, fans know that a full understanding of the band can only be achieved through experiencing them live.
support the kickstarter campaign for the rockin doc! http://www.kickstarter.com/projects/225802176/all-the-labor