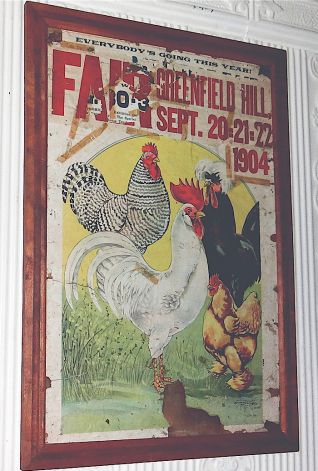 Can-do: Grange shows how to preserve nature's bounty
by Mike Lauterborn
Monday, August 12, 2013 for the Fairfield Citizen
With a can-do attitude and an interest in preserving the bounty of the harvest, a group gathered Saturday at the historic Greenfield Hill Grange to learn about canning and preserving homegrown fruits and vegetables.
The program was one of a series planned in conjunction with the grange's 120th anniversary this year.
Steven Golias, a graduate of the Culinary Instituteand a grange member, led the two-hour session, which was attended by about 15 people. They took notes as he described the process of canning, and sampled some of the preserves and pickles Golias prepared in the grange kitchen.
"The Greenfield Hill Grange chapter was established in 1893," said Beth Bradley, the grange vice president, "though this actual structure wasn't completed until 1897. It was a club for area farmers, for the sharing of growing techniques and community services. Essentially everything that everyone is now doing with local sustainability was done then -- they were ahead of their time."
Read the full article HERE