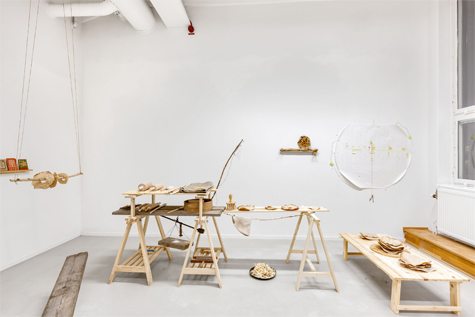 Gallery 16 is excited to announce a major exhibition/archaeological look at the important Bay Area art collective Futurefarmers. This exhibition will present objects spanning nearly 20 years of art making.
The human brain is wired for categorizing, it's an essential trait, but one that makes following the myriad artistic, design, and social engagements of Futurefarmers quite a challenge.
Futurefarmers has been practicing as a collective since 1994. Founded by Amy Franceschini, this multifaceted design team has run the gamut, both in terms of production and systems of audience engagement. Between 1995-2005, Futurefarmers operated as a high-profile design studio creating, among so much other material, the now ubiquitous logo for Twitter. Their early clients included Lucas Film, Hewlett Packard, Swatch, and Greenpeace. They used the profits from their design projects to support an artist in residency program, research interests, and to engage in art projects around the globe. Over the past decade they have focused their design efforts towards the non-profit sector and activist realm. Their art practice has also taken shape in the form of civic engagement with a strong desire to participate in and initiate change in the places we live.
They've created temporary schools, community bread ovens, and large-scale exhibitions internationally. The Lunchbox Lab, enabled students to discover hydrogen-producing algae, which they showed in MoMA's 2008 exhibition Design and the Elastic Mind. They've developed antiwar computer games, soil testing and remediation programs, even a Homeland Security Blanket! Their ongoing project with the City of San Francisco, Victory Gardens, supports the transition of unused land into food production areas. In this past year they have erected a bake house in Norway and presented projects at the New York Hall of Science, the Berkeley Art Museum, and SFMOMA.
Futurefarmers' work has been included in exhibitions internationally at venues including ZKM Center for Art and Media, the Whitney Museum, New York MoMA, the San Francisco Museum of Modern Art (SFMOMA) and the Edith Russ Site for Media Art. Their awards include a Graham Foundation grant, an Investing in Artists grant from the Center for Cultural Innovation, the SECA Art Award from SFMOMA, an Artadia Award, a 2010 Guggenheim Fellowship, and a Eureka Fellowship.
Their name, Futurefarmers, is a play on the nomenclature of an agricultural organization established in the early 20th century, the Future Farmers of America. As their name suggests,they share a collective interest in living and working on a farm.
The group assembles in as various configurations of these bright lights; Amy Franceschini, Stijn Schiffeleers, Michael Swaine and Lode Vranken in collaboration with Noah Murphy-Reinhertz, Myriel Milicevic and Marthe Van Dessel.
40.714353-74.005973
hudson, new york