Via the Organic Seed Alliance:
There shall be at the seat of government a Department of Agriculture, the general design and duties of which shall be to acquire and to diffuse among the 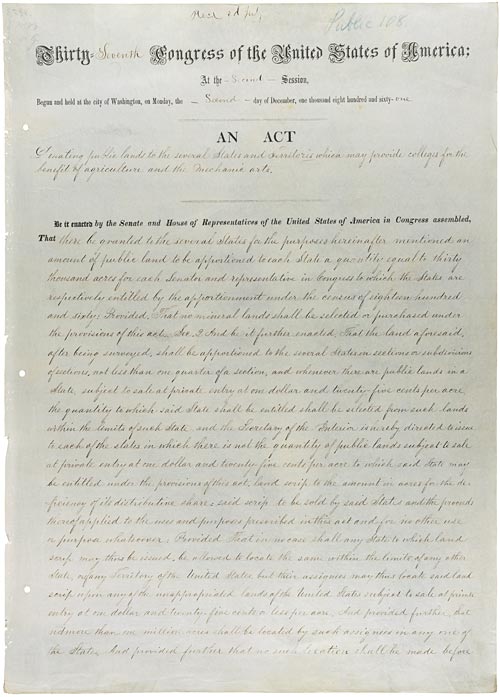 people of the United States useful information on subjects connected with agriculture, rural development, aquaculture, and human nutrition, in the most general and comprehensive sense of those terms, and to procure, propagate, and distribute among the people new and valuable seeds and plants.
– Department of Agriculture Organic Act (May 15, 1862)
It is also the intent of Congress to assure agriculture a position in research equal to that of industry.

– Morrill Act (July 2, 1862)
This year marks the 150th anniversary of two laws that significantly transformed U.S. agriculture. The first law launched the U.S. Department of Agriculture, which President Abraham Lincoln, in his last address to Congress, called “the people’s department.” He placed the farmer’s interest above all others. The second law, the Morrill Act, established our land grant university system, intended “to teach such branches of learning as are related to agriculture.”
The new infrastructure established through these laws aimed to expand U.S. agriculture for the sake of prosperity and security – to further research, education, and innovation, and make advancements accessible to all.
In important ways these laws were about sowing seeds, literally and figuratively. But today, their intent has been undermined by policies and practices that collectively leave farmers with less access to what was once a public resource.

A core function of the Department of Agriculture when it was formed in 1862 was the collection and distribution of germplasm. Concerted efforts to introduce new plants to the U.S. began centuries before, but for much of the nineteenth century, before USDA was established, the Patent Office fervently carried out these activities, mailing millions of seed packages to farmers across the nation. (There is great irony in this fact, as you’ll read.)
By the end of the nineteenth century, a third of USDA’s budget was allocated for germplasm collection and distribution. The department encouraged farmers to trial any crop that seemed economically important to U.S. agriculture, and continued the practice of distributing seed free of charge. And, thanks to the Morrill Act, states had a place in the plant sciences. Land grants largely focused on collecting germplasm and conducting research in areas that were not profitable to burgeoning private ventures.
Picture it: USDA freely distributing seed to farmers (at the time, half the population) not so much as a commodity but as an essential natural resource best managed in the hands of the people. The department understood that the nation’s growing crop diversity was a product of farmers serving as the nation’s first plant breeders. Their labor and land – and the knowledge base they built through experimenting, screening, and selecting – effectively adapted exotic plants to regional agricultural economies.
Continue reading HERE