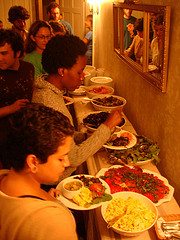 The much anticipated first annual Greenhorns rabbit roast festively came and went a little over a fortnight ago. The weekend sped by with out a hitch, only a broken car window and a few rabbit pellets scattered around.

Twas Brilling but not yet raining as the rabbit roasters trickled in by train, bike or car from up and down the Hudson Valley to Glywood Farm. Emboldeded by the Gylnwood Center's meandering driveway enveloped by forest, ponds, pastures, barns and barn animals, attendees set up their tents and congregated at the main house for a talk with the director of Glynwood, Judith LaBelle. LaBelle elaborated on the mission and projects of the Glynwood Center, a non-profit committed to conserving "local culture and natural resources" especially in the area of agriculture. That scenic farm is also the site of intensive activism on the topic of community empowerment in the realms of land conservation. Usually the groups meeting out on the lawn are talking strategically about preserving a viable agriculture in their town or region. Our aim with The Greenhorns is to recruit, promote and support young farmers in America, so in fact our missions overlap in time. Glynwood helps groups preserve farmland, Greenhorns hopes to help young farmers get started, and get access to farmland. And what a glorious piece of farmland for such a meeting. 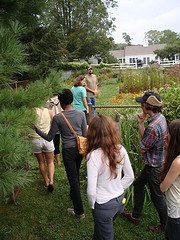 After LaBelle's compelling talk, roasters were led on a tour of the lush Glynwood gardens. Dave Llewellyn, the head gardener of the CSA led the parade.

By the end of our orienting walk, the decisive moment had arrived: the first workshop of the roast, "How to kill a rabbit 101" with Severine. The crowd sat in a tense semi-circle surrounding a quite nervous Severine and her unsuspecting culinary victim.

Severine described her decision to raise rabbits, the conditions in which they live, the particular culinary and historical traditions of rabbit rearing, the ecological justifications for domestic small animal husbandry... it was quite a lot of talking.  Meanwhile, the rabbit still lived, sitting calmly in his basket. Finally, with the group assuring her that we were ready. With a mallet, Severine stunned the rabbit and proceeding to cut off its head, peel off the fur, clear out the guts and ready it to be served at lunch the next day.

Although witnessing the lapse between life and death was emotionally marking for some, all agreed that seeing this process was key in deepening the connection with their food. 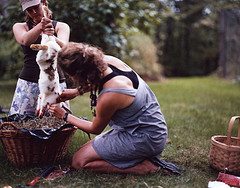 The rabbit session was followed by an informative workshop on food politics by James Subudhi of WE ACT for Environmental Justice followed. James made sure to Alert us that the USDA Child Nutrition Programs, the Special Supplemental Nutrition Program for Women, Infants and Children (WIC) and the WIC Farmers' Market Nutrition Programs are all up for reauthorization and people can submit reauthorization comments electronically through regulations.gov or fax to 703-305-2879.

As intensity simmered, an extensive dinner was laid out, completely composed of ingredients grown by young farmers in the Hudson Valley and prepared by young Chefs, Jason and Lief.

A keg of Peak Organic Beer was rolled out and the Ginger Ninjas began setting up their bike-powered amps. Roasters danced and steadily biked along providing the energy for Red Rooster. Kipchoge and the Ginger Ninjas, currently touring the country from gig to gig on the very bikes that power their music, followed jamming about the revolution, giving Dick Cheney some love to transform him and liberating your mind from commericial b.s. 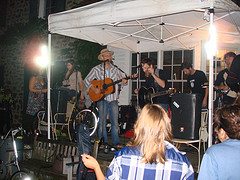 The next morning the smell of breakfast sausages lured participants out of their tents to breakfast and a talk on top-bar bee keeping with Sam Comfort. From driving trucks of bees to pollinate monocultured nut fields in the west to reviving dwindling bee colonies in the south, Comfort's healthy obsession with bees was clear as he told how he came to be one of the youngest bee keepers in the country.  He currently run Anarchy Apiaries www.anarchyapiaries.org where he raises queen bees and constructs chemical free hive boxes in the Hudson Valley.

Alan Webber of Rural Route Films www.ruralroutefilms.com also made an appearance at the Rabbit Roast and screened several quirky shorts including insights into urban agriculture in Cuba, the part farmer part dentist that started a free dental clinic in west Virginia out of his house,  from his festival. Upcoming screenings of Nordic films at the Scandanavia House from Sept 24- Oct 18…check it out!

In the afternoon, Tracy from the Bob, led a walkabout thru the estate collecting medicinal plants for a tincture making workshop. We learned that  there is a plant for every symptom! 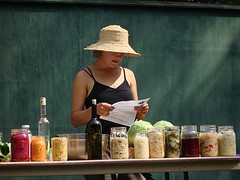 Erin Bullock from Sisters Hill Farms  and Amy from the Bob led a fermentation workshop. A rainbow of different ferments were there for sampling and the two gave a thrilling demo on cabbage chopping and the lore of lactobacillis.

Then, at 4 pm Sunday afternoon--despite quite a few departing revelers, Tom Mylan, Brooklyn based butcher at Diner and Marlow & Sons, taught everyone how to cure a ham, we have filmed this workshop so if you missed out, please stay posted on our mailing list to get the details on that- bottom line: it takes over a year and mountains of salt.

By the end of the day the roasters took down their tents and departed back to their city or farm lives' with a hopefully rekindled enthusiasm about strengthening policy, community, entertainment and skill support for young farmers. It was a success, and only whetted our enthusiasm for a bigger, bolder, bicycle-powered agrarian revival next year. If you are keen to join our organizing committee, get in touch now! [email protected]