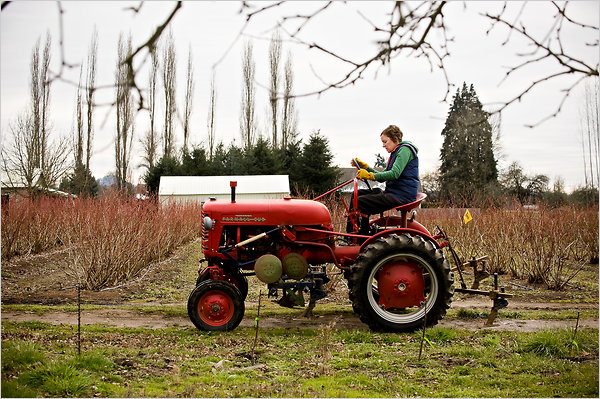 In New Food Culture, a Young Generation of Farmers Emerges By ISOLDE RAFTERY
CORVALLIS, Ore. — For years, Tyler Jones, a livestock farmer here, avoided telling his grandfather how disillusioned he had become with industrial farming.
After all, his grandfather had worked closely with Earl L. Butz, the former federal secretary of agriculture who was known for saying, “Get big or get out.”
But several weeks before his grandfather died, Mr. Jones broached the subject. His grandfather surprised him. “You have to fix what Earl and I messed up,” Mr. Jones said his grandfather told him.
Now, Mr. Jones, 30, and his wife, Alicia, 27, are among an emerging group of people in their 20s and 30s who have chosen farming as a career. Many shun industrial, mechanized farming and list punk rock, Karl Marx and the food journalist Michael Pollan as their influences. The Joneses say they and their peers are succeeding because of Oregon’s farmer-foodie culture, which demands grass-fed and pasture-raised meats.
“People want to connect more than they can at their grocery store,” Ms. Jones said. “We had a couple who came down from Portland and asked if they could collect their own eggs. We said, ‘O.K., sure.’ They want to trust their producer, because there’s so little trust in food these days.”
Read the rest of the article here, and check out the slide show too.