one outcome of drought in california

...would be incentives for other regions  to begin and expand vegetable production. Indeed here they are, stepping high!
Imagine the job creation potential...OH WAIT, you don't have to: Leopold Center did an Iowa jobs report. 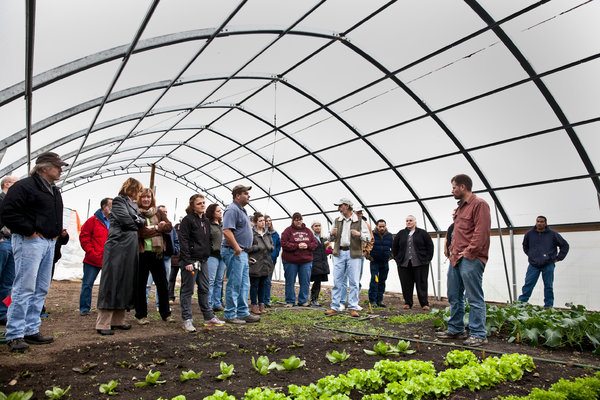 John D. Jackson lives in the heart of the Corn Belt, where most of the corn has nothing to do with sweet kernels on the cob. His farm in Southern Illinois typically grows field corn, the high-starch variety that is turned into ethanol and cattle feed. He also works as a logistics manager for Archer Daniels Midland, the agricultural giant that produces the other big artifact of this crop: high fructose corn syrup.

But on 10 of his 700 acres, Mr. Jackson broke from this culture of corn last fall by planting something people can sink their teeth into. With a tractor and an auger, he drilled four-foot holes in his soil, added fertilizer and put in 48 apple trees bearing Gold Rush, Jonagold, Enterprise and the sweet-tart blushing globe called the Crimson Crisp. This year he plans to add more apple trees, blackberry bushes and possibly some vegetables.

Mr. Jackson is part of a small but eager cadre of corn farmers who are starting to switch sides, as it were, lured by a little-appreciated fact of farm economics: There is vastly more money to be made in growing other vegetables and fruits. While an acre of corn is projected to net average farmers $284 this year after expenses, and just $34 if they rent the land, as is common, an apple orchard on that same acre will make $2,000 or more, according to crop analysts. A sophisticated vegetable operation using the popular plastic covers called high tunnels, which increase yields and extend the growing season, can push that figure as high as $100,000.