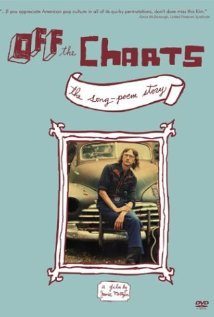 OFF THE CHARTS: The Song-Poem Story is a fascinating, at times unsettling, documentary that exposes the strange underworld of the song-poem industry. In this little known subculture, "ordinary people" respond to come-on ads on the back pages of magazines, mailing in their heartfelt but often bizarre poems to "music industry" companies that, for a fee, turn those poems into real recordings. OFF THE CHARTS explores a truly unique, never-before-seen slice of Gothic Americana through interviews with several song-poem writers, the jaded producers and musicians who set their words to music, and a few of the growing number of zealous song-poem connoisseurs.
More HERE
and
HERE