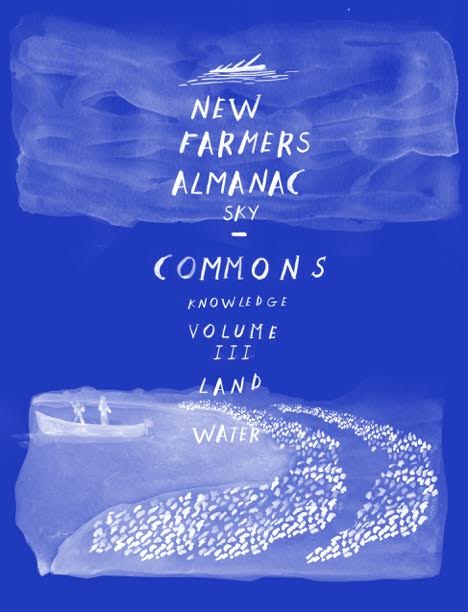 Greetings writers, artists, photographers, agrarians! It’s almanac time again! If you would like to contribute to the next volume of the Almanac, now is the time to get thinking, writing and creating agrarian content. This year we have a wonderful new editor Briana - you can contact her with your ideas and submissions at [email protected].  Please see below for more details about the submissions process as well as our guidelines for themes for the upcoming Almanac.

- ASAP/ By the End of January: Send a quick description of what you want to submit to [email protected]. If we’re amenable, we’ll invite you to submit via a google form.

- February 28 will be the deadline for completed submissions.

Send us essays, interviews, recipes, ruminations, reading lists, rants, star charts, stories, instructions, jokes, thoughts, dreams, or other curious textual things. For prose, 700 words (give or take) is our preferred length. If you’re submitting poems, give us up to three to consider. If your work defies such categories, aim for one page, or two, or three (but no more than that unless we ask).

We will solicit your reactions to selected art works early in 2018. Let us know if this form of writing calls to you.

As usual we have laid out some themes as a scaffold to inspire and provoke your Almanac contributions. You can ignore them, or you can rebut them--but it does seem to work well when we have some consonance within the chapters.

The overarching theme of this year’s almanac is a bigger, broader WE. The motto we’ve chosen is: Together WE can make the Almanac (and agriculture) great for everyone. As Marada Cook always says: “Food is physical”--and the physical proof of a series of inter-linked land actors--so when Aldo Leopold talks about “Land as a community to which we all belong,” it’s perhaps not too dumbed-down to recognize ourselves and one other as both inextricable beneficiaries and victims of land-use decisions. Directly or indirectly. Now or sometime soon. What fictional and exclusive “We” that sees itself apart from the coiling, uncoiling, and recoiling of nature’s news may exist in TV newscaster and consumerist narratives, but this is a shrinking and fortified minority--a miserable abstract demographic otherness.

We therefore challenge ourselves to look straight at the question: “Which WE are WE? And how can we work more together in that WE?” Aren’t WE the settler-homesteaders, aren’t we the dispossessed Irish, Scottish, Mexican, and Caribbean diasporas who arrived penniless on ships? Aren’t we the re-settled Japanese or Chinese coolie-workers? Aren’t we the trail-guard cavalry or buckboard opportunists with a pick-axe? Aren’t we those enslaved for sugar or cotton? Aren’t we the offspring of oppressors and oppressed? Aren’t we the H2A guest workers, or undocumented and fearing the traffic cop? Aren’t we the kids on the Reservation, or orphaned from it by bureaucracy? Aren’t we those chased over the border by structural adjustments, refugees of the “Green Revolution”? Are we not All of these?

Aren’t we all citizens of this same landscape, voters in our watersheds, stewards in the neighborhood, committee members to a changing climate? Isn’t that the WE we are talking about? The bigger broader inclusive and all-encompassing WE, the WE it will take to turn this situation around. The hearts and minds and shovels and sandbags, the libraries and ambulances, the pollination and aquifers, the relief efforts and scar commons that will take part in the distributed volition and immediate reactions to crisis near and far. WE collaborators who can relate with one another alongside, not one-sidedly, in this our shared project of survival.

The editors of this year’s New Farmer’s Almanac challenge you, dear authors and agrarians, to consider the WE. To name your subject, your object, your actions and your place in the ecosystem of successional, emergent, spontaneous, collaborative and altru-opportunist future-making that lies ahead.

What story are WE?

- Radical Extension--a thought experiment on how the Extension service might operate in the future, imagine the role of community testing plots for new crops and varieties.

- Punk Extension--a thought experiment on how communities might self organize to do crop research and form adaptation strategies on next crops...

Looking across the bow at a new economy--a report from the International Sail Freight Alliance.

- How do we orient (post-colonially) to the logic of the landscape, the harbor, the river-system, the portages and canal-making.

- Bodies in Motion/Thoughts on animal movement, human migrations, and the finding of habitable habitats in our beleaguered world.

- Looking at the cargos pre-diesel:Sandalwood, Potatoes and Sardines to the California Gold Rush, Opium and tea Trades, Chilean Nitrate, Russian Hemps, Chinese Silks, Tropical Hardwoods, Masts and lumber, Molasses and Rum, Ice to India. Pick a story, go research it-- and tell us what you learn of its enduring consequence.

- Wobbling docks, longshoremen, and the Wobblies.

- Some thoughts on Partnerships and LLCs.

Criss-crossing the plains and passes. Please choose one and teach us about it.

- The role of the US cavalry, native treaty negotiations, and broken promises. Fort Laramie.

- The history of trade along the Santa Fe Trail.

- Jedediah Smith and the Beaver trade.

- Tracking on the farm, using spoor and knowing the wild life.

Farmers Cooperatives, especially the sheep/goat cooperatives of Texas and Colorado, a micro history.

- The Oak Savanna, and its analogues (Savanna Institute).

- Oil Trains, a report from Wisconsin on the rail freight of fracked shale gas.

- Fraternity, exploring the themes, rituals, economic relations and underlying lessons of Fraternal orders in the US.

- Stories from Grange revivals and dissolutions.

- What went down with the California “Green Grange Movement.”

Faith Lands
Testimony from farmers working within religious communities, or on church-owned lands.

- A report from the Catholic Workers Movement.

- Super PACs--back to the land as a progressive political strategy, Brian Donahue...

- Illustration: Peasant holidays secured in different feudal arrangements, concessions for subsistence alongside service to the estate/center of power.

- Overview of the H2A system.

- Sharecroppers Union formed Southern Federation of Cooperatives, the legacy and the work ahead.

What would a Restoration Economy look like? And would it pay as much as videography?

- Confronting racism in the food system.

- Thought experiment: What would it look like if the Food Deserts got a Land Trust, and elected to protect their agricultural foodshed?

- Market limits...Who will smoke it all?

- Race and enforcement, legalization for whom?

- Discussions about warehouses, hydroponics, and the future of ‘organic’.
Book Review.

- Population breeding, a report on the work in Italy.

- Adaptation, how does nature learn?

- Personal audit, who are my people? Which WEs am I?

- The story of Chimayó chiles.

- About the Huckleberry Commons of Mt. Hood.

Looking at the forms of human coping post-crisis, post-displacement. How we reformulate ourselves into coherence. Reactive institution-making.

- Personal reflections on healing from trauma.