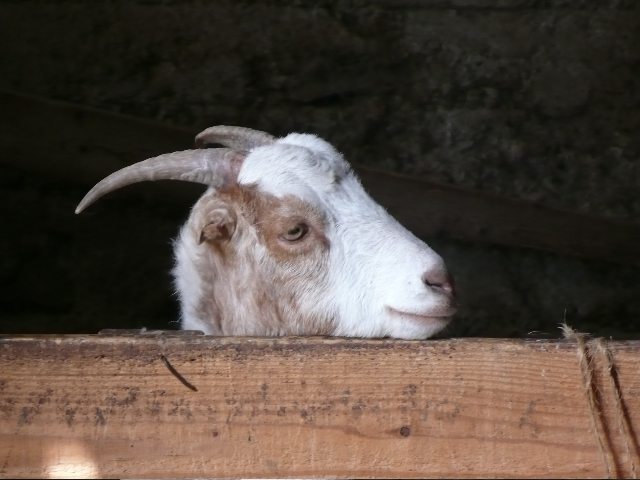 Check out this video from Organic Consumers: "What is the National Animal Identification System & Why It Should Be Rejected"
http://www.organicconsumers.org/articles/article_16869.cfm
And read Severine's Letter to Dolly the Sheep - "Dear Dolly, with regards, from Severine" full text below

A letter to a cloned sheep, pig, broiler or dairy-creature.
(Beware: this is satire.)
Dear Dolly,
Well. It seems that the US Food and Drug Administration, in all its wisdom, has decided that American citizens will be safe eating cloned animal products. Yes Dolly, that means ewe, your lambies, and even your immaculate lactation.
Move over chicken-McNuggets, you pioneers of homogeneity. Henceforth, diversity, individuality, evolution, and even mitosis are out. You showed the way, Dolly, and genetic-uniformity is in! Celebrate at Safeway with simultaneous glee the supersized super-beef, and the super-buxom boneless chickens of the future- pink and wiggly in the Styrofoam tray, copyright pending- no rooster required.
Monoculture climax. Imagine thousands of identical twin piglets housed in giant blinkered warehouses, mini-trotters on sanitary cement, snuffling noses aloft in brotherly fervor under a haze of disinfectant. The industrial pig will be chosen well among the thousands of domestic porcine breeds-he'll be the champion porker, the fastest growing, the most resiliant to factory conditions, the size most desired by slaughterhouse engineers. A few lab-coats for hire will splice in a some special genes for hardiness from a cactus, a few genes for tenderness from a porpoise, a few ‘synthetic' genes for proprietary reasons. And then our piggy will be replicated, to the exclusion of his cousins, by the million-fold. (All other breeds will be kept as relic ‘proto-pig' specimens of cells on frozen Petri-dishes. Perhaps in a facility managed by the federal government, perhaps in a vault buried under perma-frost in Sweden. In any case safely out of sight, and for all practical purposes extinct. This is something that we call ‘ex-situ' conservation.)
And what are the risks of such a system you might well ask? Asking that question is to exercise the "precautionary principle." This principle cautions us to look before leaping, and to consider the possible consequences and causalities of new technologies before signing ourselves (and our grandchildren) up for the technologist's newest product. The product in this case is the proliferation of singular, one dimensional production methodology. The trouble comes when an industrial model of production meets the ecological reality of dirt, water, and photosynthesis.
The first, most basic, rule of ecology is this: Diversity is strength. A diverse system, a system composed of variably adapted parts is resilient to disease, pestilence and associated crisis.
Even if you have never seen a Bullock-in-action, and the associated barnyard romping- you probably bite into your burger with the assumption that birds, bees and a certain amount of native biology were involved in the manufacture of your nutrition. Consciously or not, we believe in biology's way of generating the building blocks of our biological bodies. Transgeneticists hope to change this process into something much more clinical, and much more sinister.
Lets be clear. The push for approval of clone-technology was certainly not fomented by a gangly rat-pack of forward thinking farmer/scientists. No indeed, the brittle ecology of hegemony, factory-efficiency and maximal profits is a brainchild of the industrial meat industry.
While we're on the topic of piggies, the hog industry for a start is one of the most specialized agribusiness sectors, with an ever slimmer per-hog margin of about $5. Only Smithfield Foods, its subsidiaries and sub-contractors would be able to afford the genetics, efficiencies of scale, and tremendous investment costs of a transition to ‘clone-nation.' Their current best-practice relies on tail-docking, hormones, anti-biotics, and rubber-mouthed legislators tolerant of swine shit lagoon overspills.
The corporate porkers raised today, far from their furry, free-ranging ‘heritage breed' friends out around Berkeley, are already practically identical.
Unlike the sloop-happy Wilbur in Charlotte's Web, fed on farm-residues and buttermilk, their poop is toxic waste, their farts cause global warming, their diet is derived almost exclusively from subsidized, over-fertilized, genetically manipulated corn. Its not really a pretty picture.
If you mistrust the tone of my prophesy, as the hyperbolic rantings of a querulous luddite- let me refer you to a wonderful book that makes my cautiousness seem tame as Betty Crocker. If this issues intrigues you, please read: Margaret Atwood's Oryx and Crake .
Regards,
Severine von Tscharner Fleming
[The intrepid ‘future surfer's ultimate techno-guidebook is the E.T.C. Group. They focus a lot on nano-technology, and the convergence of Erosion, Technology and Control. Remember, the cartels of Columbia have managed to produce a "roundup-ready" coca plant.]