mothers to regulators: we will not comply 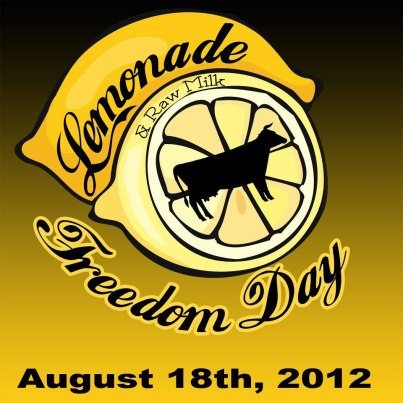 August 16, 2012-Washington, DC (Business Wire)—On August 18, 2012 a group of mothers and others, members of the advocacy groups, the Raw Milk Freedom Riders and Lemonade Freedom Day, will take their raw milk and lemonade to the lawn of the US Capitol to celebrate their right to “voluntary exchange.”

By offering raw milk and lemonade for sale or barter, which is illegal in many places including Washington DC, these mothers and other activists risk criminal charges, and possibly jail.  Last August, in a similar protest, three people were arrested for selling 10-cent cups of lemonade.
The lemonade stands and raw milk tasting booths will be set up on the mall at 12:00 noon on the lawn of the Capitol reflecting pool. The approximate location is around 3rd Street Southwest between Maryland and Jefferson in Washington DC.
“The law has turned ordinary people into criminals for engaging in normal human behavior,” says Liz Reitzig, one of the event’s organizers. “I am proud to stand with others as we peacefully do not comply with these laws.”
National Lemonade Freedom Day founder, Robert Fernandes, began his annual event after seeing news reports about children’s lemonade stands being shut down because they did not comply with regulations.  “The government has overstepped its boundaries by trying to regulate kids’ lemonade stands and farmers who are feeding their communities.  We have the right to engage in voluntary exchange and peacefully obtain the food of our choice from the producer of our choice whether that’s raw milk from a local farmer or lemonade from the children next door without input from regulators.”
Joining the group will be Kristin Canty, director of the critically acclaimed documentary Farmageddon -- The Unseen War on American Family Farms.  “It is so sad that the Government is abusing its power by conducting armed raids on small farms.  They are criminalizing farmers for feeding their communities and criminalizing mothers for trying to feed their families healthy food,” Canty says.
Information about farm raids: www.FarmFoodFreedom.org For additional information on raw milk: www.westonaprice.org for information on Lemonade Freedom Day www.lemonadefreedom.com
The protest event will be livestreamed at this website: http://www.ustream.tv/channel/lemonade-raw-milk-freedom-day