this is from the USDA! (and click on the map to buy our poster...)
Mapping and Modeling Eastern U.S. Food Production
By Ann Perry
September 2, 2009
Agricultural Research Service (ARS) scientists are mapping an array of county-level data from Maine to Virginia on weather, soil, land use, water availability and other elements. Then they'll use their map to model potential crop production and find out where local food production could meet current and projected demand—and where it won't. 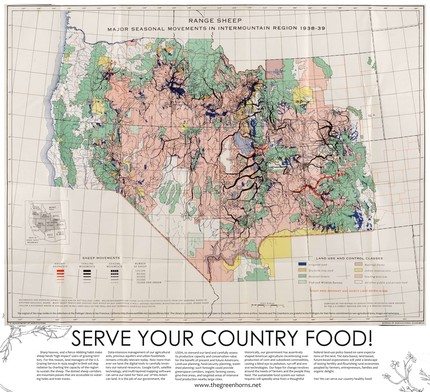 Until recently, low fuel prices have contributed to the globalization of the U.S. food system. Food crops that are grown and processed in one region are often transported over long distances to a range of different markets. As a result, many of the fruits and vegetables consumed in the U.S. Eastern Seaboard Region have been produced and brought in from other parts of the country or other parts of the world.
Research leader Wayne Honeycutt and agricultural engineer David Fleisher believe that relying more on the strategic production of locally grown food can counter the challenges of rising transport costs, growing population demands and vanishing farmlands. Honeycutt works at the ARS New England Plant, Soil and Water Research Laboratory in Orono, Maine, and Fleisher works at the ARS Crop Systems and Global Change Laboratory in Beltsville, Md.
Expanding the opportunities for local food production could stimulate rural development and offset the risk of food shortages in one area by increasing and diversifying local production in other areas. So the scientists are collaborating with a range of partners to model actual crop production practices and the flow of agricultural products into supply chains, including all the associated handling and transportation costs, from farm field to market. This will help identify how the costs and benefits of locally grown produce compare with produce that is transported over long distances to the Eastern Seaboard market.
Read more about this research in the September 2009 issue of Agricultural Research magazine.
ARS is the principal intramural scientific research agency of the U.S. Department of Agriculture.