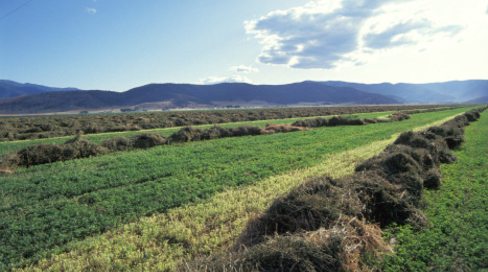 After months of negotiations, OFFC and the Center for Food Safety have reached a proposed settlement with the two GE alfalfa growers that had sued to overturn Jackson County’s ban on genetically engineered crops. The settlement still needs to be approved by the County and federal court, but we expect it will be.
Under the settlement, the Jackson County ban passed by voters will stand and the federal court’s opinion upholding the measure will not be appealed! This will leave the will of Jackson County voters in place and protect family farmers growing traditional crops from contamination by genetically engineered crops.
Additionally, the two growers will not proceed with their Constitutional takings lawsuit against the measure. OFFC and CFS, in turn, will agree not to force these farmers or the very small number of other farmers that planted GE alfalfa before the measure took effect to destroy their perennial crop before the end of its lifecycle, which under typical conditions we expect will be in several years. These growers will not be able to replant or replace their crops and must use specific new controls to avoid potential contamination impacts.
The intent of the measure was never to force farmers to rip up and destroy perennial crops and in our view this is a very reasonable way to ensure that the protections against genetically engineered crops approved by voters will remain in effect.
We simply could not have achieved this without your help and support and the great work of our attorneys with Earthrise Law Center and the Center for Food Safety.
Thank you for all you have done to get us where we are today.
Onward,
Elise Higley
Executive Director
Our Family Farms Coalition
http://www.ourfamilyfarmscoalition.org/