here i am, i'm planting my trees. 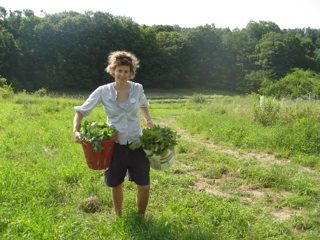 ROCHESTER, Wash. — Joseph Gabiou walks the fields of Wobbly Cart Farm with a practiced eye. He kicks dirt into place to keep the wind from blowing the protective covering off a row of organic broccoli. The seedlings are vulnerable to the flea beetles that came in the spring, just as longtime farmers in this valley told him they would.
To a new farmer, that's crucial information. The farm, started five years ago, is young. But so is the 33-year-old Gabiou at a time when the average age of the American farmer is 57, according to the Department of Agriculture. The 2007 agriculture census found that more than one-quarter of all farmers are 65 or older.
Wobbly Cart is also tiny, just 6 acres. Nationwide, the average farm is 449 acres.
But Gabiou and business partner Asha McElfresh, 32, differ from typical farmers in another way. Wobbly Cart, say agriculture specialists, is part of a movement in which young people — most of whom come from cities and suburbs — are taking up what may be the world's oldest profession: organic farming
"I'm seeing an enthusiastic group of young people all across the country who want to get into farming," says Fred Kirschenmann, a longtime farmer and fellow at the Leopold Center for Sustainable Agriculture at Iowa State University in Ames.
The wave of young farmers on tiny farms is too new and too small to have turned up significantly in USDA statistics, but people in the farming world acknowledge there's something afoot.
There was a conference for beginning farmers at Stone Barns Center for Food and Agriculture in New York in November. "We thought if 50 or 70 people showed up, that would be great," Kirschenmann says. "The day of the conference we had 170 there."
At a "young farmers' mixer" last month in northern Vermont, "we were thinking we'd have 40 or 50," says Tom Stearns of the Center for an Agricultural Economy in Hardwick. But 150 showed up, some from as far away as New York.
For these new farmers, going back to the land isn't a rejection of conventional society, but an embrace of growing crops and raising animals for market as an honorable, important career choice — one that's been waning since 1935, when the U.S. farms peaked at 6.8 million.
It's about creating something real — the food people eat — and at the same time healing the Earth, says Severine von Tscharner Fleming, 27, a farmer in Nevis, N.Y. "The America that I want to live in will support people who are willing to work their asses off, who want to do good things for their community. We're patriots of place. Here I am, I'm planting my trees."
Read the full article here